A century ago, the development of technology, including the development of the telegraph, radio, and public involvement in foreign affairs, raised concerns about the future of Diplomacy. And the recently released AI from Meta has reignited the discussion. In the last twenty years, many powerful AI systems from different companies have dominated human players in games ranging from Go and Chess to more contemporary titles like Starcraft. Even though the games differ in content, they all have one thing in common: they are all zero-sum, winner-takes-all competitions. International chatbot diplomacy could not be too far behind now that CICERO has become the talk of the town within the tech sphere. Even the most powerful AI had trouble mastering the art of Diplomacy before the arrival of CICERO.

Researchers trained an AI to achieve "human level competence" in the war strategy board game Diplomacy for the first time, according to a recent report shared by Meta's Fundamental AI Research Diplomacy Team. The new AI agent, which was given the name of the canonical national leader and scholar who experienced the decline of the Roman Empire, was able to articulate with other human players, strategise with them, determine the best strategies for winning, and in some circumstances, even pass for a human. According to the researchers, Cicero now serves as a "benchmark" for multi-AI agent learning mediators because it completed its responsibilities by fusing discourse and strategic logic models. 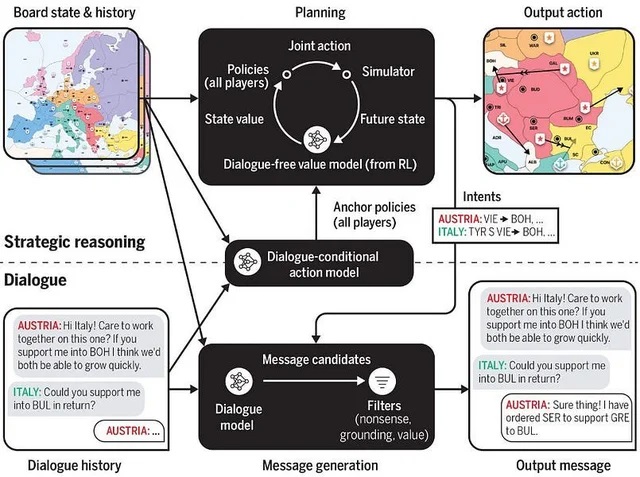 The primary distinction is that none of the systems in use today are capable of modelling people, and it is at this point the strategic element enters the picture. The majority of these technologies mimic what people say. It resembles a person but cannot think much like a human or predict what a human would say in response. Introducing the theory of mind to the discussion, one of the AI researchers who helped build Cicero, Atul Paul Jacob, added, "Most of these chatbots don't rely on that because our strategic component can predict what people would do in response. And that is a flaw in the systems currently in use.

In the board game Diplomacy, which necessitates strategic planning and verbal Diplomacy with several other players, Meta's AI demonstrated a model that can defeat numerous humans using Cicero as inspiration. Researchers believe their findings could pave the path for online dispute resolution services and workout trainers. But Cicero wasn't flawless. Cicero could have been better at predicting how the AI's discussion with one player could alter the relationships with other players over the long term because it was primarily limited to actions in its current turn. Sometimes it even sent messages that were "grounding mistakes" or went against its plans. Here, it becomes essential to note that people frequently make those identical errors. Despite these cautions, the researchers asserted that Cicero's exceptional capacity for teamwork justifies its inclusion in the hall of fame for AI board games. Even though this is only one study from a single board game, Meta's findings suggest a possibly fresh and less doomsday perspective on incremental AI advancements.