The IMF chief is warning Emerging markets of the impact from the US-China trade war. The International Monetary Fund (IMF) is an international organization headquartered in Washington, D.C. It is comprised of 189 countries that aim to “foster global monetary cooperation..

The IMF chief is warning emerging markets of the impact from the US-China trade war.

The International Monetary Fund (IMF) is an international organization headquartered in Washington, D.C. It is comprised of 189 countries that aim to “foster global monetary cooperation, secure financial stability, facilitate international trade, and promote high employment and sustainable economic growth”. It was formed in 1945 at the Bretton Woods Conference. Its initial goal was the reconstruction of the international payment system. However, its role has now changed to managing the balance of payments difficulties and international financial crises.

Throughout 2017, there were increasing warnings against protectionism. IMF Managing Director Christine Lagarde cautioned nations against becoming complacent with growth. She pointed out there are a number of threats including political tensions, as well as rising inequality that could significantly affect economic recovery.

The IMF has forecasted that 2018 will be the strongest year for global growth since 2011. According to the International Monetary Fund’s latest forecast, the global economy is on course to grow 3.9% this year, the fastest pace since 2011. Every major economy is expected to experience a balanced growth for the second year in a row. Despite ongoing disputes, the IMF predicts trade volumes to grow. Overall world trade volumes grew 4.9% in 2017, up from 2.3% in 2016. For 2018, the forecasts call for trade to increase by 5.1%. 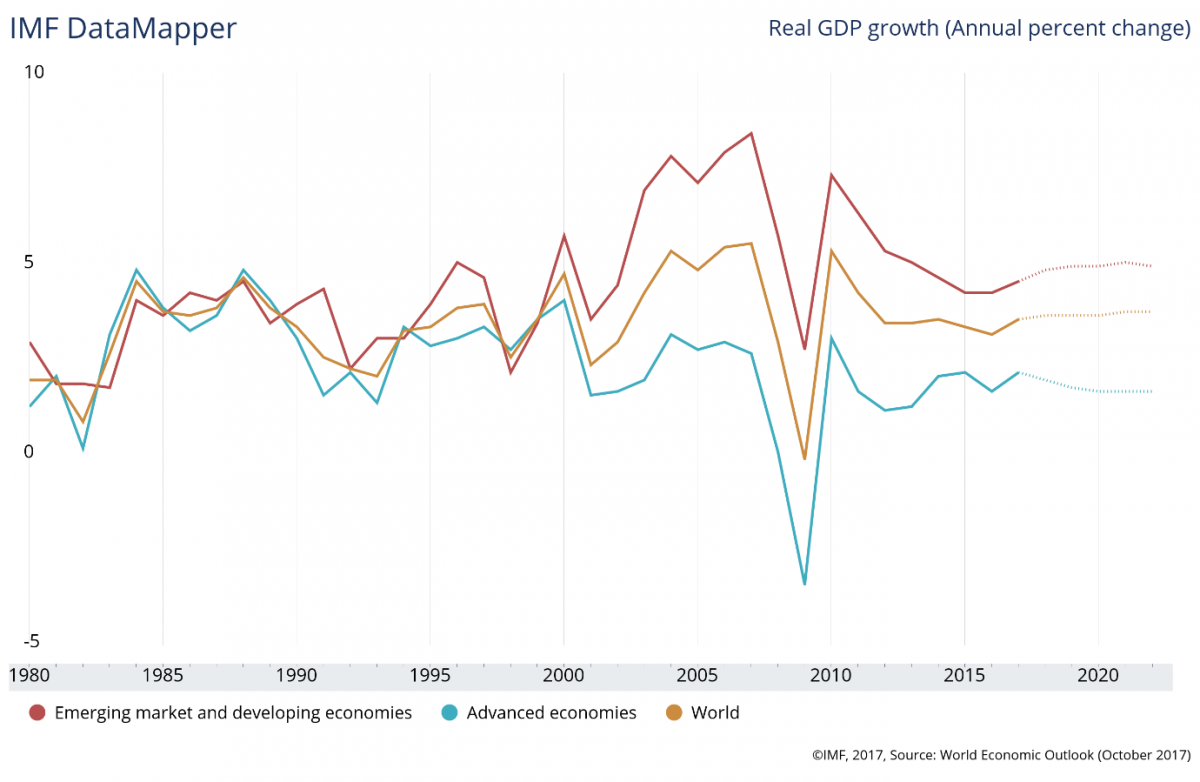 Read more about the impact of the US-China trade war on Emerging market economies here.

Read more about our analysis of IMF’s warning for Global economic growth in 2018 here.

In 2018, there have been increasing fears of a trade war between the United States and China, two of the largest economies in the world. Critics fear that such a war between the two nations could disrupt global trade systems.  These fears solidified in March when US President Donald Trump announced global import tariffs of 25% on steel, and China promised retaliation. Since then, tensions have escalated. The US has imposed tariffs worth over $150 billion; Beijing responded with $50 billion worth of tariffs.

The intensifying trade war between China and the United States could "shock" emerging markets that are already in danger, the head of the International Monetary Fund said in an interview published Tuesday. As a result, crises in Turkey and Argentina could spread, IMF managing director Christine Lagarde told the Financial Times.

After imposing steep tariffs on Chinese industrial goods in July, President Donald Trump is poised to slap 25% tariffs on a further US$200 billion in imports from China. Last week, Mr. Trump warned he was ready to impose yet more duties on all remaining US imports from that country. Beijing has so far imposed counter-tariffs in equal measure and has vowed to retaliate in kind, even though it exports more to the United States than it imports.

If the world's largest two economies continue on this course, it could have a "measurable impact on growth in China" and could "trigger vulnerabilities" in neighbouring Asian economies whose supply chains are closely linked to Chinese industry, Ms. Lagarde told the newspaper.

Some emerging economies find themselves in precarious situations, with currencies weakening in part due to the strong US dollar and investors looking instead to the United States, where benchmark lending rates are steadily rising. Weakening emerging market currencies could also affect eurozone exporters such as Germany and Spain.

Earlier in the year, Ms. Lagarde had already warned against the dangers of a global trade war, hammering the argument that trade in goods and services was a driver of global growth. She also said a key risk was weakening investor confidence.

Our assessment is that the current confrontation between the US and China poses a clear and present danger to the global economy. As stated previously, we feel that tensions between the two nations could increase the volatility in the financial market. In Asian countries, shifting geopolitics in the Korean Peninsula and in the Middle East could also pose a significant threat. We believe that in such a global political scenario, governments could focus on policies that lower risks to the financial system.

The Indian Rupee has lost close to 12% of its value in 2018, a fall which has accelerated after the trade war began. With the crude oil prices stabilising and the trade war in full swing, India is struggling to keep its currency afloat. India will have to offset the negative impacts of the trade war by selling a part of its $400 billion foreign reserves. The near future holds short-term instability for the rupee and gradually increasing oil prices.