The Synergia Foundation jointly organized a round table discussion along with the Agriculture department, Government of Karnataka on ‘Choke Points: Food and Nutritional..

The Synergia Foundation jointly organized a round table discussion along with the Agriculture department, Government of Karnataka on ‘Choke Points: Food and Nutritional Security.’ Several experts from the industry, academia, government and farmers attended the meeting. The highlight of the meeting was the intervention made by Krishna Byre Gowda, Minister of Agriculture, Karnataka.

Limited resources create situations where a country’s growing demand for more energy, more water, more food and more land cannot be all satisfied, without incurring in trade-offs between them. ‘Choke points’ are reached when available resources are insufficient to satisfy all demands and sectors of industry and the population. India’s reliance on ground water extraction is, on an average, 37% higher than its natural recharge rate. Water scarcity creates complex trade-off between energy and food production. India produces about 270 million tonnes of food grains and is considered food secure. However, India is not nutritionally secure as 25% of the population is going without a second meal. The inefficient functioning of the supply chain results in an 18 - 20% loss as food wastage. Climate change, land degradation, shrinking biodiversity, imbalanced use of fertilizers are also severe limiting factors to increase productivity. The objective of the round table discussion was to bring together key stakeholders and gain a deeper understanding of the problem related to ‘Food and Nutritional Security’ with special focus on Karnataka. Core issues such as the importance of food security to national security, choke points, triple burden malnutrition, connected risk and double farming were debated by the experts. Krishna Byre Gowda, the Minister of Agriculture, Government of Karnataka spoke about the key choke points in India’s food and nutritional security paradigm. He spoke about the need of efficient use of water, land and human resources in maximizing farmers’ income and agricultural productivity; and also pointed out the need to accommodate the human resources that will be released due to a slowdown in the traditional manufacturing and the services sector. 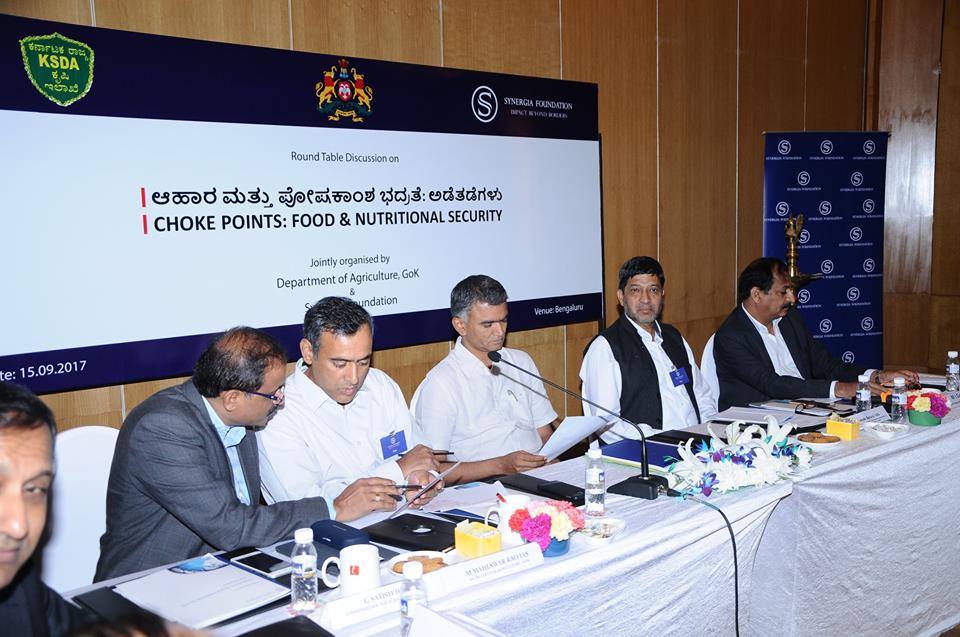 Mr. Gowda also felt that we had to factor climate change and look at how we can benefit from changes in weather pattern. He noted that rather than looking outside the country to address India’s food needs, there needs to be a concerted effort to become completely self-sustainable. Ashok Dalawai, CEO, National Rainfed Area Authority spoke about how farmer’s income should not be increased just to meet a target. He added that there needs to be a sustainable plan and that it was important to view agriculture not as a national system but as a private enterprise. He added that as an enterprise it should be professional, profit making and assess risks.

Suresh Babu, a farmer from Chitradurga district in Karnataka said that water is the primary need for famers in the nation. He believed that if the authorities are able to satiate the water needs of the Indian farmer, then several problems in the industry will be solved. Y.C. Rudrappa hailing from Hassan, pointed out that the middle man ends up receiving a higher commission than the farmer. Principle Secretary - Agriculture, Maheshwar Rao, spoke about the advent of overproduction in the farming sector. He believed that the target should be in achieving sustainable production levels.

Dr. S.A. Patil, former Vice Chancellor, UAS, Dharwad said that India should push transformational changes in the sector and this can be achieved from the grass roots level. He also spoke about the need for university degrees that teach students agriculture and farming management. Such courses should also include integrated technologies. Prasad Chandran, Former Managing Director of BASF India Ltd, said that smaller farmers in the country do not get as many benefits and subsidies as the more wel-established farmers with large land holding. This is a problem that needs to be addressed, according to Chandran. He believed that there needs to be a structural change facilitated by the government and a ‘mind-set’ change, in which the private sector has a role to play.