China’s investment in the Padma Bridge project, that connects north and south of Bangladesh, has been a growing cause of concern for India. China’s Twenty-First Century Maritime Silk Road – ‘One Belt One Corridor’ focuses primarily on connecting and encouraging..

China’s investment in the Padma Bridge project, that connects the north and south of Bangladesh, has been a growing cause of concern for India.

China’s Twenty-First Century Maritime Silk Road – ‘One Belt One Corridor’ focuses primarily on connecting and encouraging cooperation among Eurasian countries. Most of the South Asian countries have signed the deal. India has however maintained a strong stand of not being party to the joint initiative. India abstained from the OBOR forum, their main concern is that the ‘China Pakistan Economic Corridor’ (CPEC) which is part of OBOR runs through Pakistan occupied Kashmir.

OBOR is a development strategy that focuses on connectivity and cooperation between Eurasian countries, primarily the People's Republic of China (PRC), the land-based Silk Road Economic Belt (SREB) and the oceangoing Maritime Silk Road (MSR). The strategy underlines China's push to take a larger role in global affairs with a China-centered trading network. The future of trade in Asia could depend heavily on what becomes of China’s expansive One Belt, One Road initiative.

Bangladesh is the third largest trade partner of China in South Asia. But bilateral trade between them is highly skewed in favour of Beijing. China has bolstered its economic aid to Bangladesh to address the concerns of trade imbalance. Under the auspices of the Asia-Pacific Free Trade Agreement (AFTA), China removed tariff barriers to 84 types of commodities imported from Bangladesh and is working to reduce tariffs over the trade of jute and textiles. China has also offered to construct nuclear power plants in Bangladesh to help meet the country's growing energy needs, while also seeking to aid the development of Bangladesh's natural gas resources. 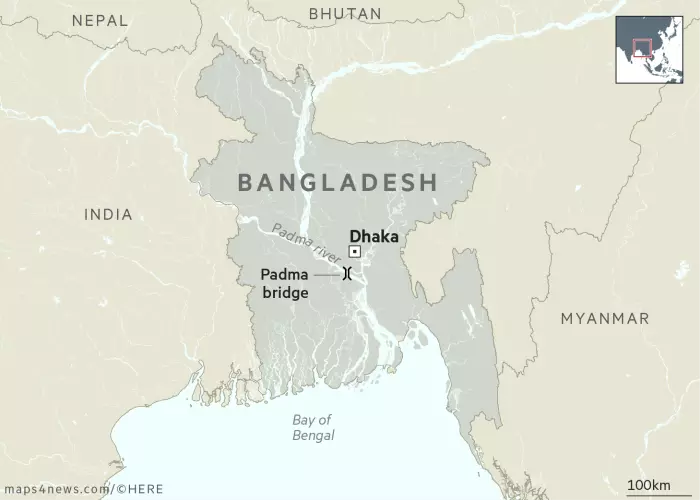 The Padma Bridge is a multipurpose road-rail bridge across the Padma River in Bangladesh. The progress of the construction of the much-talked-about Padma Multipurpose Bridge is now more than halfway to completion, after overcoming many hurdles. The Bangladeshi government is optimistic that the megastructure will boost the GDP by 1.2%. The $3.7bn bridge project is also a physical reminder of China’s growing presence in the country.

China has provided more than $3bn for the project as part of a wider plan to spend $30bn on Bangladeshi infrastructure schemes. China stepped in after the World Bank cancelled a $1.2bn credit line for the scheme, saying it had found “credible evidence” of corruption in the project. The scale of Chinese investment in Bangladesh, further asserts its significance in South Asia, where it has funded similar projects in Pakistan, Sri Lanka, Nepal and the Maldives.

Moreover, India is opposed to China’s OBOR policy, and seems to be cautious of Chinese presence in Bangladesh. India and Bangladesh share strong historic links as India helped create Bangladesh when it joined its eastern neighbours fight for independence from Pakistan in 1971. India considers itself Dhaka’s natural and principal ally, thus, Chinese influence in Bangladesh is more worrisome for India as compared to their trade deals with Sri Lanka, Pakistan and Maldives.

New Delhi was particularly aggrieved when the Dhaka Stock Exchange chose to sell a 25 % stake to a consortium of the Shanghai and Shenzhen stock exchanges for $119m, rather than to India’s National Stock Exchange, which bid 56% less. Executives from the NSE travelled to Dhaka in a failed attempt to persuade regulators to block the Chinese deal, arguing that China was using it as a way to gain political power in the region.

However, India still seems to have some diplomatic upper hand to foil China’s plans in Bangladesh. In February 2016, Dhaka cancelled a plan for China to build and operate a deep-sea port at Sonadia, after pressure from New Delhi, which was worried about Chinese interference in the Andaman and Nicobar Islands.

Experts in Bangladesh say the country is happy to accept Chinese money but does not want China to interfere in anything that India sees as a threat to its national security. Mr Ahsan Mansur said, “This is a development opportunity as far as Bangladesh is concerned. We are not interested in security — we want the benefit of the economic relationship.”

Our assessment is that the Padma Bridge project will not only ease communication between Dhaka and the southern part of the country but also change the economic landscape of the country. We feel that the scale of Chinese investment in Bangladesh is further evidence of Beijing’s deepening relationships with its neighbours in South Asia.  However, we believe that India expresses their distrust towards Chinese investments as it is a strategic tool used by China to assert their dominance in the region.