Beijing has detained close to a million Uighurs, an ethnic Muslim population of China’s Western Xinjiang Province. US lawmakers are calling for sanctions after a UN report highlights the massive human rights violation in Xinjiang. The Uyghurs are predominantly Muslims and have regard themselves as culturally and ethnically..

US lawmakers are calling for sanctions after a UN report highlights the massive human rights violation in Xinjiang.

The Uyghurs are predominantly Muslims and have regarded themselves as culturally and ethnically close to Central Asian nations. They practice Islam in a largely atheist country and have inhabited the area since the time of Genghis Khan. The Uyghur’s briefly declared independence in the early 20th century. However, the region was brought under the complete control of the People’s Republic of China in 1949.

The UN Committee on the Elimination of Racial Discrimination has been hearing testimony on the Chinese government's treatment of its Muslim Uyghur minority, among other issues.

In their submission, to the committee, the Germany-based World Uyghur Congress (WUC) said they estimated at least one million Uyghurs were being held in political indoctrination camps as of July 2018. Responding to questions on Monday, a representative of the Chinese government called the accusations of mass imprisonment "completely untrue."

The UN panel said it was alarmed by “numerous reports of detention of large numbers of ethnic Uighurs and other Muslim minorities held incommunicado and often for long periods, without being charged or tried, under the pretext of countering terrorism and religious extremism”. 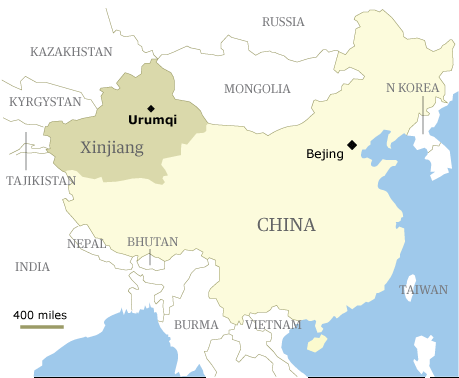 Read more about our extensive analysis of China’s detentions in the Xinjiang province here.

The detention programme has swept up people, including relatives of American citizens, on ostensible offences ranging from accessing foreign websites to contacting overseas relatives. Other aspects of the security crackdown include all-encompassing digital surveillance, mass deployment of police and severe regulations against religious customs and dress.

China denies that such internment camps exist, but says criminals involved in minor offenses are sent to “vocational education and employment training centres”. “The argument that ‘a million Uyghurs are detained in re-education centres’ is completely untrue,” Chinese representative Hu Lianhe this month told the UN’s Committee on the Elimination of Racial Discrimination in Geneva.

China has said that Xinjiang faces a serious threat from Islamist militants and separatists who plot attacks and stir up tensions between the mostly Muslim Uyghur minority and the ethnic Han Chinese majority. China’s statement does come with a sting of irony as Beijing has been vocally critical of Western policies on dealing with radical Islamic organisations.

Beijing actively censors religious teachings and imposes a system of atheism which puts the Communist Party leadership on the forefront of all social activities. The basis of atheism in Communist ideology is largely drawn from Marx’s essay on how religion is the “opium of the masses”. However, China uses it to suppress the expression of public faith in any institution apart from the Communist party.

China’s foreign ministry has rejected the allegations, saying anti-China forces are behind criticism of policies in Xinjiang.

In the US, lawmakers have written to the Trump administration asking for sanctions on Chinese officials allegedly tied to the mass internment programme and “ongoing human rights crisis” in Xinjiang.

Muslim ethnic minorities faced torture and “egregious restrictions on religious practice and culture”, said the letter, which was signed by Senator Marco Rubio, Representative Chris Smith and 15 others. The letter singles out Xinjiang’s top official, Chen Quanguo, accused by many of turning the region into a police surveillance state.

Marco Rubio (R-FL) and Smith (R-NJ) raised the possibility of imposing sanctions on Chinese officials under the 2016 Global Magnitsky Act. They also asked the acting US ambassador to Beijing, Terry Branstad, to visit the region and collect information on Xinjiang officials responsible for the mass detention policy.

Our assessment is that while Xinjiang faces mild threats from Islamist militants, the larger reason for this strife is the curtailment of freedom for the Uyghurs in their religious, commercial and cultural activities by the ethnic Han Chinese majority.