Reports have emerged that China is quite possibly testing a hypersonic “rail gun”. It is believed to be testing of the world’s first ship-mounted rail gun. The rail gun is capable..

Reports have emerged that China is quite possibly testing a hypersonic “rail gun”. It is believed to be testing of the world’s first ship-mounted rail gun. The rail gun is capable of shooting down a satellite and is powerful enough to take down a warship.

Beijing has made significant investments to alter maritime balance of power with US.

During the latest national Party Congress, Chinese leader Xi Jinping spoke about his vision for China. He specifically highlighted the importance on further developing the region’s military might. So far it is the largest military. However, Jinping’s has envisioned the country to also boast the most technologically advanced military as well. He said it would promote national defense and military modernization, including “a modern army, navy, air force, rocket army, and strategic support force, and a strong and efficient command agency for joint operations.”  He added, “A military is prepared for war. All military works must adhere to the standards of being able to fight a war and win a war. Our army is the people’s army; our defense is national defense. [We must] enhance the education on national defense education, consolidate the unity between the military and civilian, in order to achieve the Chinese dream of a strong military.”

In recent months reports have emerged of China using pioneering technology to develop powerful arsenal. It is reportedly planning on making use of robots and robotics in an effort to increase its bomb and shell production capacity by threefold. It is using the technology of Artificial Intelligence in order to achieve this goal and boost the productivity of its ammunition factories. It is also updating its old outdated computer systems aboard nuclear submarines with artificial intelligence.

The Chinese People's Liberation Army (PLA) consists of five professional service branches: the Ground Force, Navy, Air Force, Rocket Force, and the Strategic Support Force. It is the world's largest military force, with a strength of approximately 2,285,000 personnel, 0.18% of the country's population. It is the fastest growing and modernising military power in the world.

A railgun is a device that uses electromagnetic force to launch high velocity projectiles, by means of a sliding armature that is accelerated along a pair of conductive rails. It is typically constructed as a weapon and the projectile normally does not contain explosives, relying on the projectile's high speed to inflict damage. 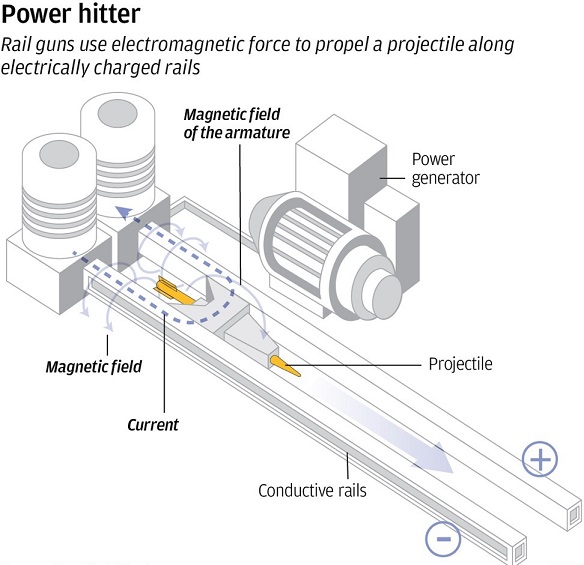 Beijing is reportedly conducting the first experimental deployment of a new ‘supergun’ aboard a warship. It is a rail gun that can be mounted aboard a ship. It is capable of shooting down a satellite and is powerful enough to take down a warship.

The nation has made significant investments to alter maritime balance of power with US. The two regions have often clashed over the disputed South China Sea in the past few years. Incidentally, US has been developing a similar railgun since 2005. The US has researched and tested rail guns for years, with prototypes firing projectiles at up to 7,800km/hour over a 150km range. The cost of the projectiles was reportedly US$1 million per round.

Railguns are much faster and more powerful than conventional guns used in combat. They offer more precision in targeting enemy ships and can reportedly shoot down satellites. They can reach targets that are 100 nautical miles away. However, one of the disadvantages of a railgun is that it requires an enormous amount of electric power for it to function.

Experts are cautious about confirming the veracity of the reports based on the photographs that have surfaced. “Based on the pictures a rail gun is a plausible explanation, but it’s not conclusive,” said Chad Ohlandt, senior engineer at the Rand Corporation in Washington, DC.

Song Zhongping, military commentator and former member of the PLA’s Second Artillery Corps, “China has spared no effort to catch up the US’ electromagnetic technology, to turn the new technology into an all-purpose propulsion system for wide use in ship-mounted weapons and maglev trains and even to replace rockets to launch satellites into the space. The leaked photos show China is now not only catching up to the US in ship-borne rail gun technology, but may surpass the US in next five to 10 years. This is because the US needs more time to approve budgets while China’s political system allows it to put more funding into special projects.”

Our assessment is that is that China is investing heavily in developing artillery in a bid to establish its dominance not only in Asia but in the world. The nation has ambitiously charted various avenues to increase its global influence. It is in particular in a race to surpass American technology and arsenal. If China is able to successfully develop a functioning railgun that can be mounted on a naval ship, then it could change the maritime balance with the US. It would also have a profound effect on the ongoing conflict regarding South China Sea.