The European Space Agency and Aerospace Corporation have recently released updates on a Chinese spacecraft’s re-entry into the Earth’s atmosphere. It is believed..

The European Space Agency and Aerospace Corporation have recently released updates on a Chinese spacecraft’s re-entry into the Earth’s atmosphere. It is believed that the Tiangon-1 space station will fall uncontrolled through the Earth’s atmosphere, and may contain toxic materials on board.

China’s space program is directed by the China National Space Administration. China’s first manned mission took place in 2003, when Yang Liwei was launched into space in the Shenzhou 5. In 2007, China became the fifth nation to successfully orbit the moon. In 2013, the “Jade Rabbit” rover landed successfully on the moon. There have been a total of 6 manned missions thus far.

China has one of the only two space stations currently capable of human occupancy in orbit. The first is NASA’s International Space Station. The second is China’s Tiangon-2 space laboratory, which has been manned at its longest for a month. Crews to this station are transported using the Long March launch vehicle. The Tiangon-2 is a precursor to a larger, permanent station, planned to be in orbit by 2023.

President Xi Jinping has been a vocal advocate of the country’s space program, which has grown increasingly ambitious. In 2016, the country announced its intention to send a mission to Mars by 2020. Construction for a permanent station is scheduled to begin in 2019.

However, China’s space program has elicited concern from countries such as the United States. The US Defence Department is concerned that China’s program could be used to block enemies during a crisis, and is also suspicious of its military connections. Beijing has maintained that the programme is entirely peaceful. China is a member of the United Nations Committee on the Peaceful use of Outer Space.

Tiangon-1 was launched on the 30th of September, 2011, from the Jiuquan Satellite Launch Centre in northern China. At the time of launch it weighed approximately 8.5 tonnes. The name “Tiangon-1” translates literally into “Heavenly Palace 1”. Tiangon has seen two manned visits, one of which included China’s first female astronaut, Liu Yang. The last of these visits took place in 2013, and it has been unoccupied since. In 2016, it was reported that all official contact with the station had been lost. 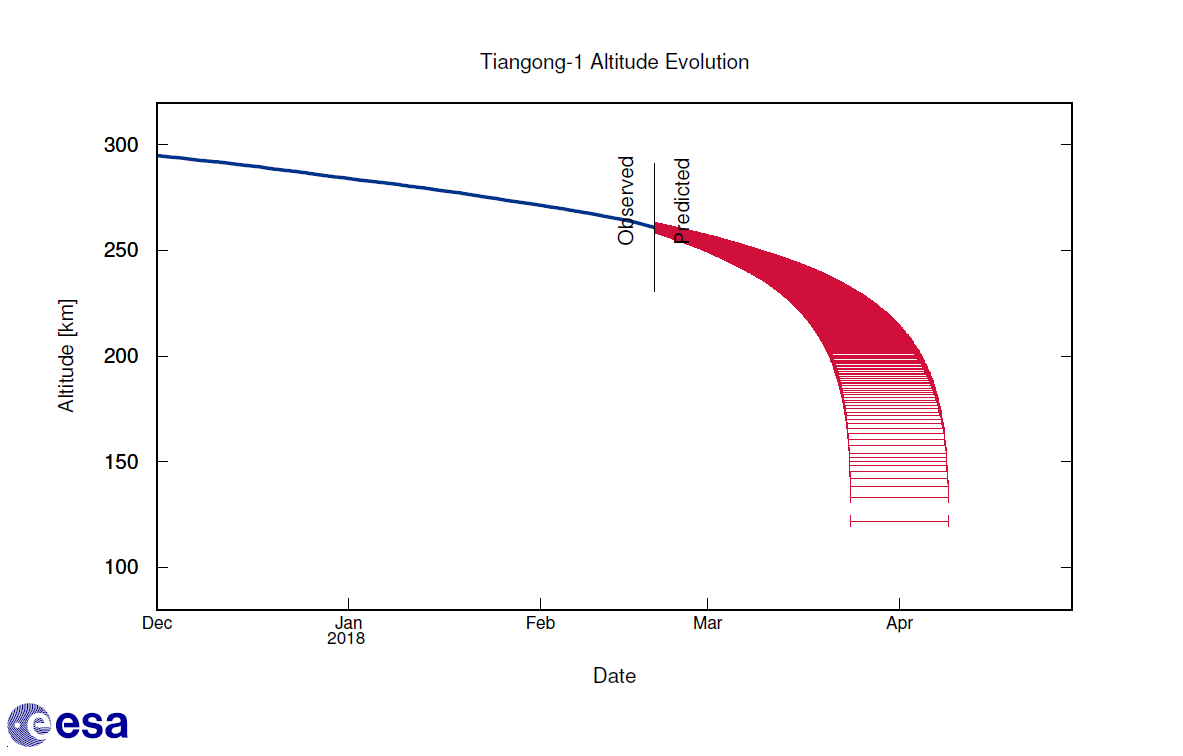 Detailed reports of the “out of control” Tiangon-1 space station first emerged in November last year, when researchers released estimates of where and when the station would fall. They predicted that the station’s orbit would decay in the first few months of 2018. While no official statement has been made, it is believed that re-entry will not be controlled.

According to Aerospace Corporation’s most recent projections, Tiangon-1 will re-enter the atmosphere during the first week of April. Aerospace Corporation is a US-funded space advisory body. The European Space Agency’s (ESA) estimated timeframe for re-entry is March 24th – 19th April.

“Owing to the geometry of the station’s orbit, we can already exclude the possibility that any fragments will fall over any spot further north than 43°N or further south than 43°S,” Holger Krag, Head of the ESA’s Space Debris Office stated.  “This means that re-entry may take place over any spot on Earth between these latitudes.”

Tiangon-1 is presently falling at approximately 6km/week, an increase from 1.5km/week in October 2017, reports say.

Chinese officials have claimed that the station does not pose a safety threat. In January, officials from the China Aerospace Science and Technology Corporation told journalists, “We have been continuously monitoring Tiangong-1 and expect to allow it to fall within the first half of this year… It will burn up on entering the atmosphere and the remaining wreckage will fall into a designated area of the sea, without endangering the surface”.

Aerospace and ESA have said that it is likely that portions of the spaceship will not go through atmospheric break-up on re-entry, and will fall to the surface. The debris will scatter across an area “a few hundred kilometres in size”. The agencies noted that no person has ever been reported killed due to space debris. However astrophysicist Jonathan McDowell from Harvard University cautioned, “Tiangong-1 is big and dense so we need to keep an eye on it.”

Additionally, Aerospace has warned that surviving debris may contain toxic material, including the harmful and corrosive fuel hydrazine. Northern China, the Middle East, and parts of Italy, Spain, e tUS, New Zealand, and southern Africa all have chances of being hit by debris.

Our assessment is that Tiangon-1’s uncontrolled descent is not likely to pose a major threat. However, this incident does serve as a reminder to address a number of concerns regarding space flight. As human ventures into space continue to increase, it is essential to address issues such as orbital debris, for which we do not currently have a concrete solution.