Even as the crypto fever grips global markets, China has rolled out its virtual currency through live pilot programmes across the country. Officially known as the ‘e-CNY’, this digital renminbi is part of larger efforts to create a centralised digital payment system that supplements private electronic mechanisms like ‘Alipay’ and ‘WeChat’. Currently, this digital tender is issued by the People’s Bank of China (PBOC) to an authorised group of state-owned commercial banks and other financial institutions, which then allocate it to the end-users.

While the trials were initially carried out through randomly chosen participants in Shenzhen, Suzhou, Xiong’an and Chengdu, they have now been extended to bigger cities like Beijing and Shanghai. Apart from being used in designated retail stores, the e-CNY can be employed towards the payment of utilities, transport, and government services. If proven to be financially and technologically viable, reports indicate that China will officially launch the currency before the Winter Olympics in 2022. This will effectively secure its position as a global leader in the development of sovereign digital currencies.

As early as 2014, China's central bank had established a specialist research group to study the feasibility of state-backed digital currencies, with the aim of replacing some of the cash in circulation. Almost three years later, the State Council approved the development of this digital renminbi and tasked an institute with the creation of a developmental roadmap for the future.

As private stable coins rose in popularity, this push for a central bank digital currency (CBDC) was also accelerated. Eventually, pilot tests were launched in April 2020 to assess the strength of the digital payments’ ecosystem. In doing so, the PBOC collaborated with local fintech companies like Tencent and the Ant group, which co-developed a technical platform for the national currency, including infrastructure and distribution channels.

Even Huawei Technologies is believed to have been involved in the project by developing technical standards and incorporating a hardware-powered wallet for digital renminbi in one of its smartphones. By pre-emptively positioning itself in the digital currency space, China could emerge as a global norm-setter. It has not only devised appropriate standards and legal frameworks for the e-CNY, but also carved out relevant use-cases.

Given that it has widespread broadband coverage as well as flourishing e-commerce and digital payment platforms, the larger ecosystem is well suited for the roll-out of the CBDC. Simply by making an effort to experiment with virtual currencies, the PBOC has acquired a head start. While smaller states like the Bahamas may have been the first-off-the-mark to issue such sovereign tenders, China is certainly the pioneer among ‘major economies’.

Backed by the sovereign national issuer, CBDCs turn the logic of cryptocurrencies on their head. As opposed to the decentralised distributed ledger technology enabled by blockchain solutions, government control is maintained over the monetary system. By reshaping the monetary policy and encouraging cashless payments, it allows enhanced regulatory oversight over digital assets and prevents incidents of fraud or illicit financing. More importantly, it offsets risks associated with the accumulation of power in private fintech actors.

Currently, however, illegal transactions in China’s underground economy cannot be wholly rooted out by the e-CNY. This is because criminals and money launderers retain the option to use alternate means like dollars, euro bills or gold to further their motives. As far as big tech firms are concerned, they certainly stand to lose their market share to traditional banks. Up until now, private conglomerates like the Ant Group, Tencent, JD.com, and Baidu had exclusive access to troves of customer data, which allowed them to generate high-quality credit scores and process loan applications.

With the issue of a national digital currency, however, the PBOC will have the ability to monitor transaction histories and generate valuable insights about the customer behaviour/creditworthiness of borrowers. By sharing these details with state-backed banks, it can bridge the information gap with fintech giants and alter the balance of power between the two. 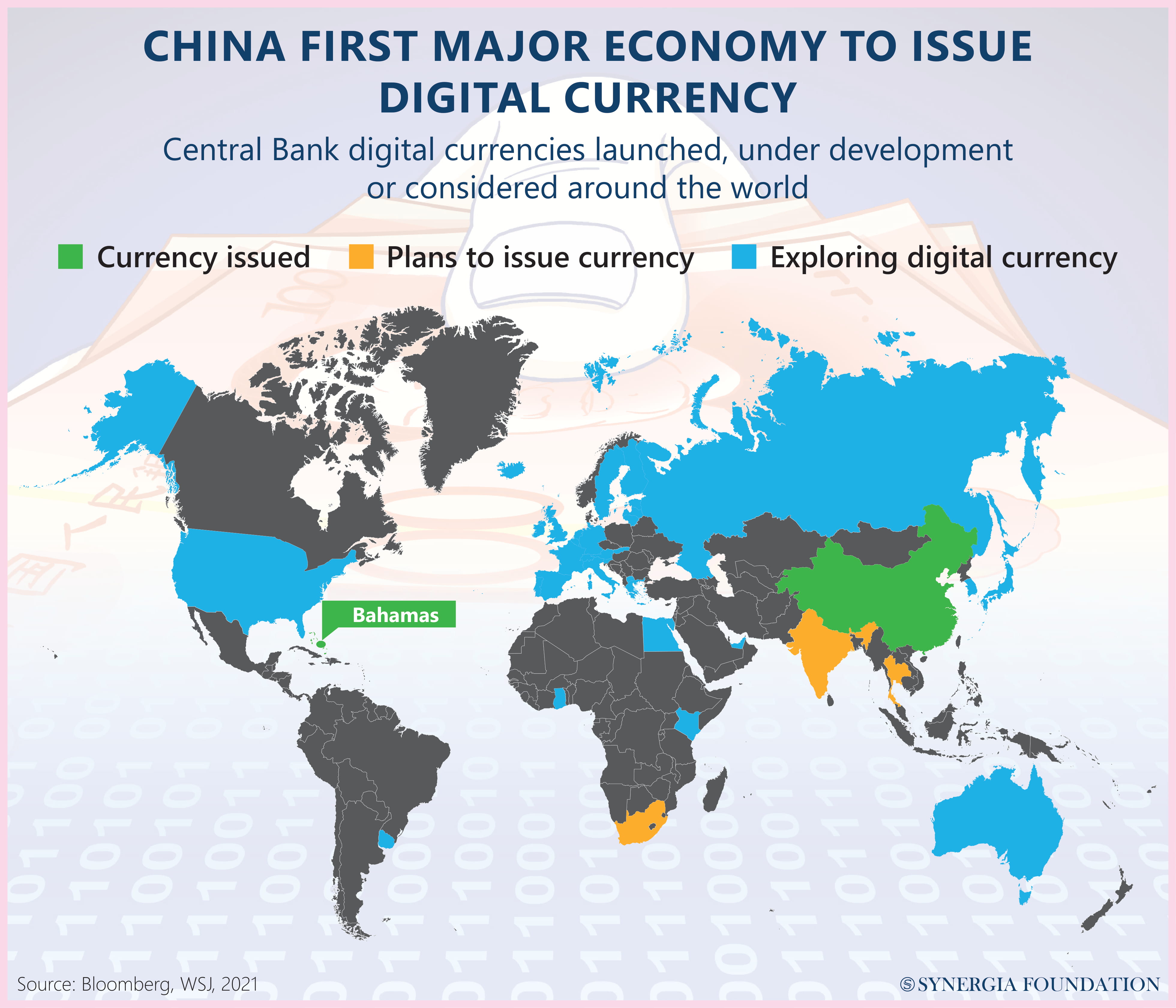 Unlike cryptocurrencies like Bitcoin, the digital renminbi eliminates user anonymity so that the central bank can acquire control over payment channels and consumption data. Every transaction is tracked and recorded by the state, leaving a digital footprint in its wake. Liberal governments fear that this can further techno-authoritarianism by the Chinese state, wherein the e-CNY is deployed as a tool to monitor the economy and its people. Moreover, state surveillance of credit scores can promote an unhealthy involvement in the personal finances of a citizen.

The public’s access to money may be restricted by the government based on their spending patterns or vulnerability to debt. However, it is common knowledge that the regulators in China have always had access to such information. All transactions on third-party platforms like AliPay or WeChat are required to pass through a central clearing platform called the NetsUnion, which is monitored by the PBOC. Transitioning to the e-CNY, therefore, does not necessarily provide additional oversight.

DEMISE OF THE DOLLAR?

At present, China has signalled that the digital money will be used for domestic retail payments, with international applications being prioritised for later. Nevertheless, the PBOC has been working with central banks in Thailand, Hong Kong, and the United Arab Emirates to explore the use of e-CNY in cross-border trade. Reports also indicate that China may try to make it possible for foreign athletes and visitors to use the digital renminbi during the Winter Olympics in Beijing.

In certain quarters, there is a belief that the internationalisation of this virtual currency may hasten the decline of the U.S. dollar as the world’s leading reserve currency. Currently, the latter’s dominance in cross-border transactions affords power to the U.S. Treasury to cut off businesses or country's access to the global financial system. Since most international transactions are routed through a dollar-denominated cross-border clearing system called SWIFT, any entity or individual that is placed on the U.S.; restricted list can effectively be frozen out of the global banking system. 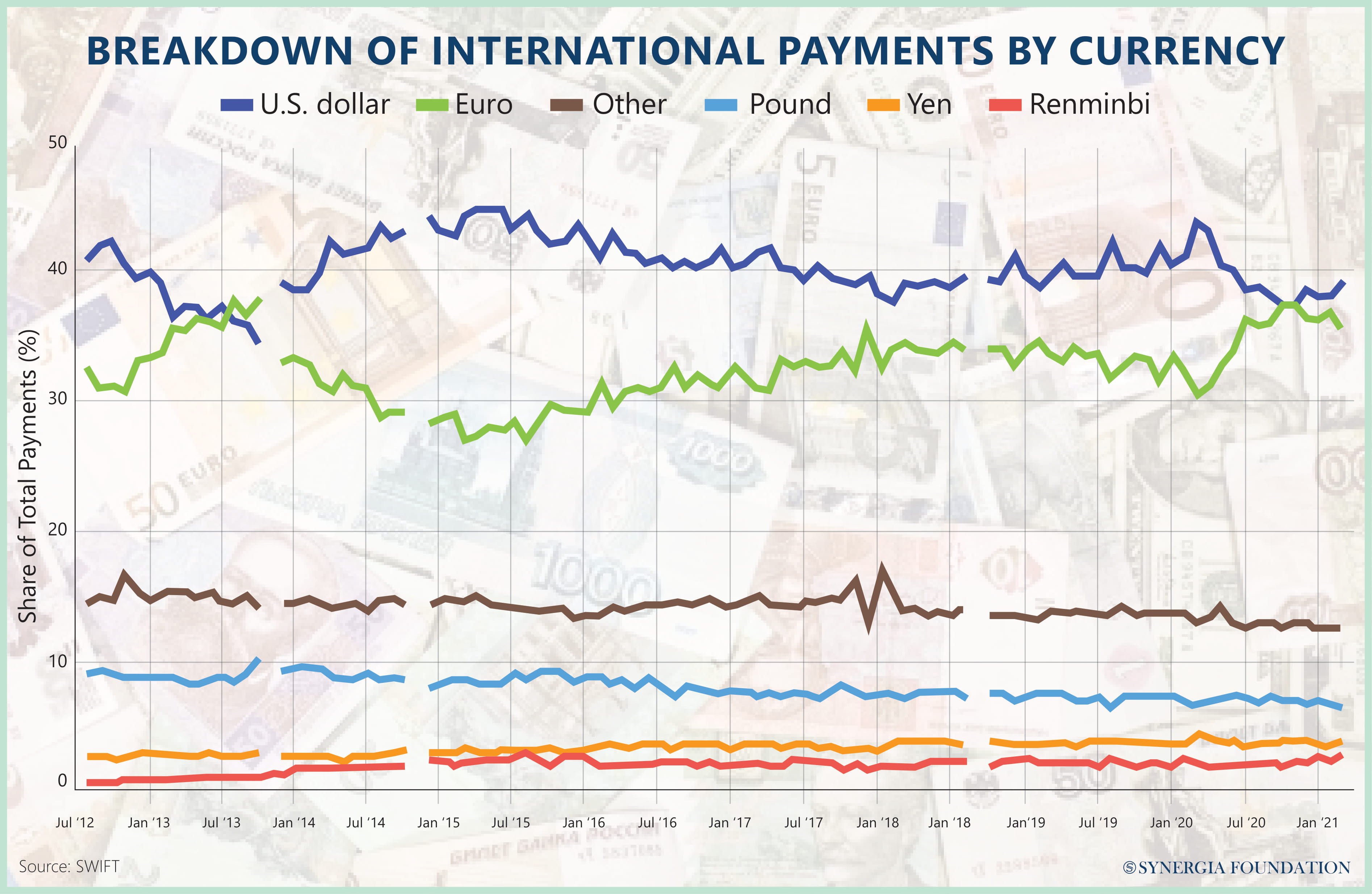 However, if used to settle international financial transactions, then e-CNY can reduce Beijing’s reliance on the U.S. dollar. It can also provide a mechanism for evading the existing sanctions regime. In other words, Beijing has much to gain from a fully evolved fintech ecosystem that rivals SWIFT. It is no surprise, therefore, that the Biden administration has stepped up its scrutiny of e-CNY. It remains to be seen whether it considers the creation of a ‘digital dollar’ to counter threats emanating from China’s CBDC.