China on a downturn?

Standard & Poor Ratings has downgraded China’s long-term sovereign credit from AA- to A+. China is the second largest economy in the world after USA. According to certain..

Standard & Poor Ratings has downgraded China’s long-term sovereign credit from AA- to A+.

IMF has revealed, “Nominal credit to the nonfinancial sector more than doubled in the last five years, and the total domestic nonfinancial credit-to-GDP ratio increased by 60 percentage points to about 230pc in 2016.” 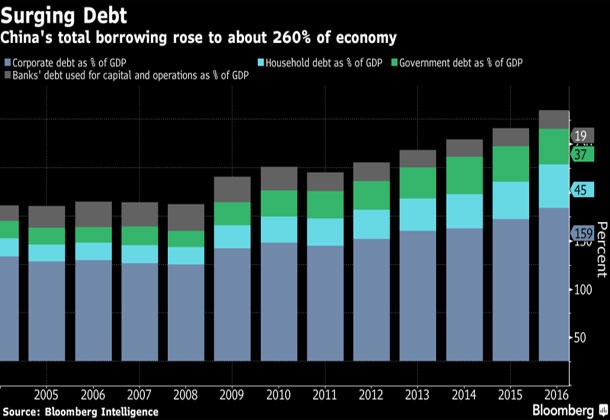 The Bank for International Settlements has revealed that nongovernment debt in China rose in 2016 and was equivalent to 257% of the annual economic output. It is 143% higher than what it was in 2008. Experts state that this is unusually high for a developing nation like China. The A+ rating is still one of the highest ratings given by S&P.

China’s government has responded by noting that S&P did not give the country due consideration before the downgrade.  "The Standard & Poor's downgrade of China's sovereign credit rating is a wrong decision," the Finance Ministry said on its website. "This misreading neglects China's good fundamentals and development potential." The ministry also said that company did not take into account the nation’s economic growth and reform efforts. Estimates have declared China’s economy will expand at an average pace of 6.4% from 2017 through 2020 compared to the 6% estimate a year earlier.

Our assessment is that this is China’s first downgrade by S&P since 1999. This may be good news for the bulls. With the Communist Party Congress slated to begin in a month’s time, we feel that the Chinese officials will be focused on keeping the financial markets buoyant. We believe large state-backed funds will probably buy rather than sell Chinese bonds and stocks. The power of the Chinese state was demonstrated after a similar downgrade by Moody’s investor service in May 2017. Any loss on Chinese stocks was squared off in a single trading session and the Yuan climbed to a seventh month high in offshore trading within a week.