The Communist Party of China revealed that it had abandoned a vote-based promotion system at its latest leadership reshuffle. This is apparently due to the fact three..

The Communist Party of China revealed that it had abandoned a vote-based promotion system at its latest leadership reshuffle.

This is apparently due to the fact three former senior officials have been accused of rigging internal elections.

The history of China can be traced back to 1500 BC under the Shang dynasty. Much of China’s culture was developed during the Zhou dynasty (1046–256 BC). The Qing dynasty which ruled from 1644 to 1911/12, was overthrown due to a military uprising. The provisional government of the Republic of China was formed in Nanjing on 12 March 1912.

The Chinese National Party Congress decides on the immediate future of the nation. Leaders of the party congregate to discuss future policies and also vote on future leadership. It occurs only once in five years. For a more detailed history of the National Congress, click here. 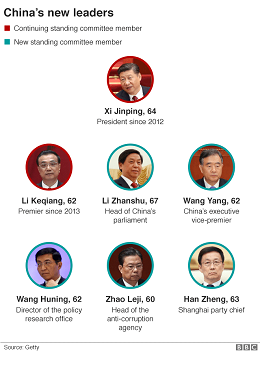 The 19th National Congress is concluded in China on Tuesday. Five new appointments were made to the seven-member Politburo Standing Committee, China's most powerful body. Chinese President Xi Jinping emerged from the Congress more powerful than ever before. China’s ruling Communist Party has unanimously voted to add his name and a political through carrying his name to the party’s constitution. Only Mao Zedong, the celebrated founder of the party, has had a similar honor while still alive.

For a summary of what occurred during the event and the party members who were elected to powerful positions, click here.

The party has also made one critical change during the Congress. Rather than using a vote-based recommendation system to choose top leadership, as the party has done in the past, it has shifted to a “consultation” mechanism. This change was made largely due to fears that three former party members may have rigged the internal elections. The accused members are the former security tsar Zhou Yongkang, former chief of staff to President Hu Jintao Ling Jihua, and former Chongqing party boss Sun Zhengcai. “The 17th and 18th party congresses adopted recommendations during meetings, but the weight of those votes was overemphasized,” according to the Xinhua article, which detailed how members of the innermost Politburo Standing Committee and the broader Politburo were selected. “Some comrades did nothing beyond putting a tick on the ballot, leading to arbitrary voting and a distortion of public opinion.”

President Xi had consultations with 57 cadres, while other top party leaders met 201 cadres to hear their recommendations. There isn’t clarity on who was consulted and in what capacity. Of the three who were accused of rigging votes is Sun Zhengcai. He had been in contention for a promotion within the party and was seen as a potential future Premier. He is currently under investigation by the CCDI for “discipline violations.” He was abruptly removed from his position in July 2017. The party has yet to announce what charges he is facing.

It is telling that at the end of the Congress, no heir apparent for Xi Jinping had been named. This will be Jinping’s second term and he will be over 68 during the next Congress. Experts have suggested that this means he will possibly be seeking an unprecedented third term. Critics have often stated that the Chinese President has used the anti-corruption campaign to push possible political threats out of the way.

Our assessment is that the Communist Party of China has made the election process even less transparent by replacing the voting system. It is possible for the President to consult with party members who are highly loyal to him in order to choose the most powerful politicians in China. It is becoming clear that the President might be looking to retaining his power well beyond 2022 and he might succeed.