Hundreds of thousands of pro-independence Catalans took over downtown Barcelona in their largest show of force since a botched declaration of independence from Spain last October. Catalonia is one of the most industrialized regions in Spain. Barcelona is the region’s largest city as well as its capital..

Hundreds of thousands of pro-independence Catalans took over downtown Barcelona in their largest show of force since a botched declaration of independence from Spain last October.

Catalonia is one of the most industrialized regions in Spain. Barcelona is the region’s largest city as well as its capital. Even though it is part of Spain, the region has a distinct culture and history dating back to the Middle Ages. Many native Catalans think of themselves as separate from Spain.

A non-binding Catalan self-determination referendum was held in 2014. Over 80% of the people voted in favor of independence. However, according to estimates, only 37% of Catalan residents voted in the ballot.

A vote for the Catalonia’s secession was held on October 1st, 2017. Out of 5.3 million registered voters in the region, more than 2.2 million people voted, according to Catalan officials. Just under 90% voted in favour of secession. 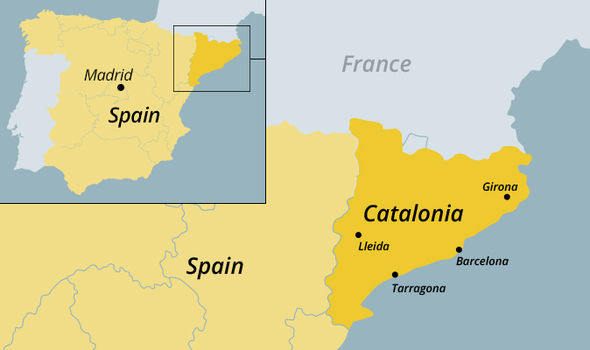 Read more about our extensive analysis on the Catalan independent movement here and here.

The rally on Catalonia’s national day, known as the Diada, was peaceful as the demonstrators deployed along almost four miles of the Diagonal, the main avenue that cuts across Barcelona. Many wore fluorescent pink T-shirts with a drawing of a mountain and the slogans “Let’s make the Catalan Republic” and “Straight to the peak.”

Still, many demonstrators acknowledged that the path toward independence looked more like a long and winding road than a straight-to-the-top ascent, particularly after last October’s turmoil.

The pro-independence rally was roughly as large as that of the previous year, with a turnout of about 1 million people, according to the local police. Turnout figures have been regularly disputed in Catalonia, but this year the central government didn’t provide its own crowd estimate.

Many of the marchers travelled by bus to Barcelona from other towns in the Catalonia region.

This year’s rally took place in the shadow of a clampdown by Madrid after the territorial conflict boiled over last October, when Catalonia held a referendum on independence that was declared unconstitutional by the central government in Madrid and Spanish courts.

After separatist lawmakers declared independence, the central government ousted the Catalan government of Carles Puigdemont and imposed direct rule on the autonomous region. Spain’s attorney general also started prosecuting 25 Catalan leaders, including Mr. Puigdemont, for rebellion and other charges related to the referendum.

Speaking before the Spanish Senate on Tuesday, Pablo Casado, the leader of the main opposition Popular Party, said there was “nothing to celebrate” on the Catalan national day at a time when Catalonia is led by Mr. Torra. Mr. Casado described Mr. Torra as “a xenophobe and a racist” determined to fracture society.

At the same time, the Barcelona rally reflected recent strains within the independence movement over whether to endorse Mr. Torra’s hard-line commitment to independence, which would risk another clash with Madrid. Politicians within the fragile separatist coalition that governs Catalonia are aware that any further moves toward secession could land them before the Supreme Court, where they would join some of their former colleagues who are already in prison, awaiting trial.

Our assessment is that the Spanish government will do everything within its prowess to keep Catalonia from seceding. This will prevent it from being a part of Europe’s single market and the European Union. The region is incredibly prosperous and its secession would negatively affect Spain. We believe that if another referendum is proposed, Madrid will look for a negotiated settlement with Barcelona and seek the help of the European Union in facilitating such a dialogue. We feel that Catalonia will hold another independence referendum but not anytime soon.