The Catalan President, Carles Puigdemont has announced that the region had "earned the right" to independence from Madrid. However, Puigdemont has suspended a formal..

The Catalan President, Carles Puigdemont has announced that the region had "earned the right" to independence from Madrid. However, Puigdemont has suspended a formal declaration and has urged that the autonomous region enter diplomatic dialogue with Spanish government.

The Spanish Prime Minister, Mariano Rajoy, has asked the Catalan government to clarify whether or not it has declared independence as he considers the unprecedented act of suspending the region’s autonomy and imposing direct rule.

Catalonia has been settled by the Phoenicians, the Etruscans and the Greeks.  It has a rich ancient history that also includes settlements by the Romans, who built more settlements and infrastructure. Catalonia remained a part of the Roman Empire until fifth century. It was only in 13th century, when the institutions of Catalan self-administration were formed. This was done under the banner of Generalitat de Catalunya. Even though unification process took place under the leadership of the Crown of Aragon in 1476, Argon allowed Catalonia to retain its autonomy. Between 1640 and 1659, there was a revolt within Catalonia for secession. Parts of the region that ceded are now part of France.

The political movement for a separate state of Catalonia can be traced back to 1922. Francesc Macià, the 122nd President of Catalonia founded the independentist party Estat Català. In 1931, after winning the elections, Macia declared the independent state of Catalonia. After negotiations with Spain, he accepted autonomy rather than independence. However, during the Spanish Civil War, General Francisco Franco abolished that autonomy. It is currently designated as a nationality by its Statute of Autonomy.

In 2014, a non-binding Catalan self-determination referendum was held. Over 80% of the people voted in favor of independence.

The momentum for an independent state once again began to build in 2017. A vote for the region’s secession was held on October 1st, 2017. Out of 5.3 million registered voters in the region, more than 2.2 million people voted, according to Catalan officials. Just under 90% voted in favor of secession. 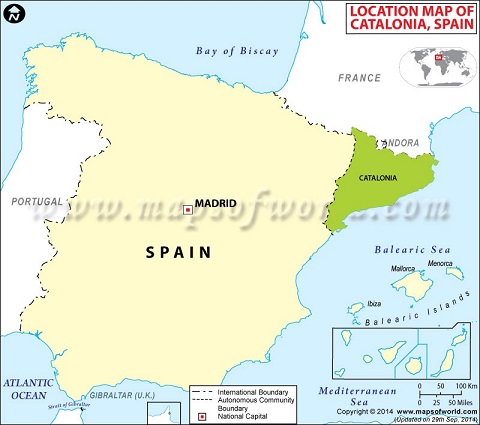 Catalonia is one of the most industrialized regions in Spain. Barcelona is the region’s largest city as well as its capital. Catalonia will be the ninth largest economy in Europe if it leaves Spain.

The main government in Spain has forcefully pushed against the Catalan referendum. Authorities have declared that the vote was illegal and void. Additionally, on the day of the vote, the government sent the Spanish Civil Guard to forcibly stop people from voting. This resulted in violence in pockets of Catalonia. At least 861 people were injured. Thousands took to the streets to protest the violence. In retaliation, there were also marches held in support of unity. The Catalan firefighters as well as the local football club, Barcelona FC, have spoken against the actions of the Spanish government.

Earlier, the Spanish government made it clear that if Catalonia declares its independence, then the government would invoke Article 155 of the country's constitution. The Catalan President, Carles Puigdemont announced that the region had "earned the right" to independence from Madrid. However, he stopped short of officially seceding from Spain. He said, “With the result of the referendum on the first of October, Catalonia has earned the right to be an independent state. It has earned the right to be heard and respected. I defend the mandate of the people of Catalonia to become an independent republic.” However, he also said that the parliament should suspend a formal declaration and opt for diplomatic dialogue with Spain.

The Spanish Prime Minister, Mariano Rajoy, has asked the Catalan government to clarify whether or not it has declared independence as he considers the unprecedented act of suspending the region’s autonomy and imposing direct rule.

Catalonia is one of the most affluential regions in Spain. Its per capita income is higher than majority of the country. It’s GDP is $255.204 billion. It also exports more goods that any other region in Spain. Thus, it is highly valuable for the nation. On the other hand, Catalonia might struggle without Spain’s aid as well. Despite its wealth, the region also happens to be the most indebted autonomous region in Spain. Out of every seven Euros in the region, around five Euros are owed to the Spanish government.

Our assessment is that it is now unlikely that Catalonia will declare its independence from Spain. The decision by Puigdemont to step back from the unilateral declaration of independence is an indication that the Catalans are fully aware of the consequences of such an action. As we have metioned earlier in our assessment, that Barcelona will look for a negotiated settlement with Madrid and seek the help of the European Union in facilitating such a dialogue. We believe that Mariano Rajoy who has put Catalonia on notice, would suspend the region’s autonomy and impose direct rule on Barcelona.