Carillion, one of the UK government’s biggest contractors, has collapsed, threatening the jobs of more than 43,000 employees as well as hundreds of subcontractors and..

Carillion, one of the UK government’s biggest contractors, has collapsed, threatening the jobs of more than 43,000 employees as well as hundreds of subcontractors and smaller businesses.

The UK's second-largest construction company buckled under the weight of a whopping £1.5bn debt pile.

Carillion plc was a British multinational facilities management and construction services company headquartered in Wolverhampton, United Kingdom. Listed on the London Stock Exchange, the company experienced financial difficulties in 2017, and went into compulsory liquidation on 15 January 2018.

Carillion was created in July 1999, by a demerger from Tarmac, which was founded in 1903; the new company included the former Tarmac Construction contracting business and Tarmac Professional Services.

Carillion specializes in construction, as well as facilities management and ongoing maintenance. It has worked on big private sector projects such as the Battersea Power station redevelopment and the Anfield Stadium expansion.

It is one of the largest suppliers of services to the public sector.

Carillion is part of a consortium that holds a contract to build part of the forthcoming HS2 high speed railway line, and it is the second largest supplier of maintenance services to Network Rail.

It also maintains 50,000 homes for the Ministry of Defense, manages nearly 900 schools and manages highways and prisons.

Carillion went on an acquisition drive from 2001

A year later Carillion bought Citex Management Services for £11.5 million and in 2005 acquired Planned Maintenance Group for circa 40 million

October 2008, Carillion bought Van Bots Construction in Canada for £14.3 million and a year later disclosed it as a subscriber to an illegal black listing body.

In December 2012, it acquired a 49% interest in The Bouchier Group, a company providing services in the Athabasca oil sands area, for £24m.

In December 2014, Carillion acquired a 60% stake in Rokstad Power

Carillion reported in August 2016 "a non-recurring operating charge of £10.5 million" representing the compensation and associated costs it expected to pay.

In December 2017, Unite announced it had issued High Court proceedings against 12 major contractors including Carillion.

On 10 July 2017, Carillion issued a trading update that referred to a £845 million impairment charge in its construction services division. Carillion's share price dropped from 192p in July to 45p by the end of August 2017.

In the first week of January, the BBC reported that the company had "a matter of days" to avoid collapse and that Carillion was the subject of "high-level government meetings"

Just after 7am on Monday 15 January 2018, the BBC reported Carillion was to go into liquidation, the company having issued a notice to the London Stock Exchange "that it had no choice but to take steps to enter into compulsory liquidation with immediate effect. 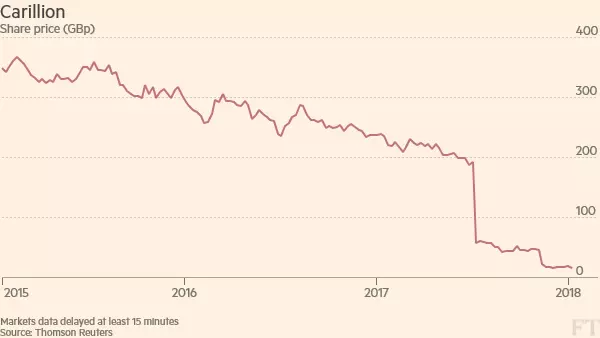 Carillion may have stretched itself, taking too many risky contracts and further faced payment delays in the Middle East. Carillions debt pile increased to over 800 million pounds and a 600 million pension deficit.

The first was on the 350 million pound Midlland Metropolitan Hospital in Sandwell The second was the 335 million Royal Liverpool hospital and finally the 745 million Aberdeen bypass.

A spokesperson from the PPF said: "We can confirm that we have been notified of the liquidation. We know this news will raise serious concerns for all people involved. We want to reassure members of Carillion's defined benefit pension schemes that their benefits are protected by the PPF."

Philip Green, chairman of Carillion, said: "This is a very sad day for Carillion, for our colleagues, suppliers and customers that we have been proud to serve over many years.

"Over recent months’ huge efforts have been made to restructure Carillion to deliver its sustainable future and the board is very grateful for the huge efforts made by Keith Cochrane, our executive team and many others who have worked tirelessly over this period.

"In recent days however, we have been unable to secure the funding to support our business plan and it is therefore with the deepest regret that we have arrived at this decision. We understand that HM Government will be providing the necessary funding required by the Official Receiver to maintain the public services carried on by Carillion staff, subcontractors and suppliers.

"RMT will be demanding urgent meetings with Network Rail and the train companies today with the objective of protecting our member’s jobs and pensions.

Rehana Azam, national officer of the GMB union, said: "What's happening with Carillion yet again shows the perils of allowing privatisation to run rampant in our schools, our hospitals and our prisons."

Our assessment is that the collapse of Carillion might lead to considerable disruption of services in the public sector. We also feel that this will also affect thousands of jobs which has now to be safeguared by the government.  A larger issue will remain as to who will take responsibility of the firm’s loss making contracts and ensure that there is no disruption of service. We sense that the government might be compelled to temporarily nationalise part of the business. We also believe that there was a sense of complacency in that a company like Carillion was “too big to fall.”