Can China’s growth be trusted?

For the first time since 2010, China has reported its fastest economic growth. The nation has stated that its gross domestic product grew by 6.9 percent in 2017. This is also the first..

China is the second largest economy in the world after the USA. According to certain forecasts, its GDP growth is slated to overtake America’s GDP in another 10 years. A hub for the manufacturing industry, China is the fastest growing economy. Its economic growth has been over 10% for over 30 years.

However, in the recent years, China’s exponential growth has come at the cost of increased debt. According to statistics, its debt is more than 250% of the GDP and is much higher than the US. It is, however, lower than Japan, which remains the world’s most indebted leading economy. Experts have said that if China’s trajectory continues, then it will be looking at an economic slump sooner than later. China’s exporting prowess has fueled massive trade surpluses and tensions with the U.S.

The International Monetary Fund endorsed China's Yuan as a reserve currency two years ago -- putting it in an elite club that includes the U.S. dollar and British pound. 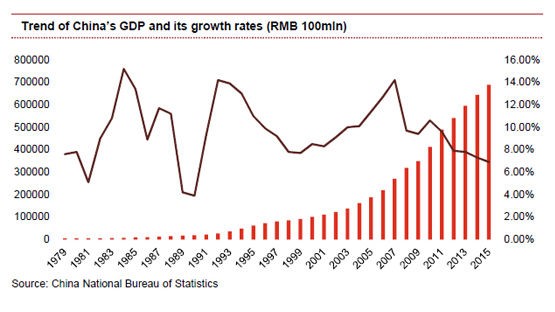 According to the Chinese government, due to a rise in exports, construction and consumer spending, the economic growth rate for 2017 was 6.9%. This beat industry expectations as well as projected estimates. This is also the first time in seven years the speed of China's economic growth went up rather than edging down.

The figure also beats Beijing's official annual expansion target of about 6.5%. In releasing the number Thursday, the National Bureau of Statistics of China said, "The economy has achieved stable and healthy development."

However, doubt has long been cast over the official numbers released by China. Analysts have for years cast doubt on the authenticity of Chinese economic data. In addition, even provinces have at times admitted to tinkering with numbers to project better data. “It’s just simplistic to say they lie or they don’t lie,” said Pauline Loong, the founder and managing director of Asia-analytica, a Hong Kong consulting firm specializing in mainland China. “They define their data differently, and they keep changing their definitions.”

Julian Evans-Pritchard, a China economist at research firm Capital Economics, has also advised his clients to not accept the numbers at face value. In a note he said that he doubted the official figures "given how implausibly stable they have been in recent years." He has estimated that the Chinese economy actually grew just 6% in 2017.

Market watchers have long been concerned about the nation's debt-fueled growth, industrial overcapacity and capital outflows that could possibly spur a global economic crisis. In December 2017, the Chinese government congregated for a three-day economic work meeting. At the top leadership decided China will follow a “high quality” growth model with more focus on fairness, the environment, and a joyful life. In addition, the leadership under Xi has decided that speed of growth is no longer an overriding concern as China now pursues development instead.

Due to new policies that are expected to be introduced, experts have noted that the Chinese economy will slow down in 2018. A recent poll published by Reuters has set the growth rate for 2018 to be 6.4%.

Our assessment is that figures released by the Chinese government indicate that the nation is on track with China’s expansion targets (which has been set at 6.5%). However, the question arises on whether the data can be completely trusted. Only recently, the governments of Inner Mongolia and of the large industrial city of Tianjin have admitted their economic numbers for 2016 were overstated. There are other concerns regarding the real state of the Chinese economy and that includes the nation’s growing debt. Experts have also warned about the nation’s local government loans, corporate and household debt and non-performing bank loans.