A partially constructed hydropower dam in southern Laos has collapsed, causing neighbouring villages to flood. Hundreds of people are missing, with an unknown number believed to be dead. Laos, commonly referred to by its colloquial name..

A partially constructed hydropower dam in southern Laos has collapsed, causing neighbouring villages to flood. Hundreds of people are missing, with an unknown number believed to be dead.

Laos, commonly referred to by its colloquial name, Muang Lao, is a landlocked country in mainland Southeast Asia. Located in the heart of the Indochinese peninsula, it is bordered by Myanmar, China, Cambodia, Vietnam and Thailand. Present-day Laos traces its historic and cultural identity to the kingdom of Lan Xang Hom Khao (Kingdom of a Million Elephants Under the White Parasol), which existed for four centuries as one of the largest kingdoms in Southeast Asia.

Laos is prone to natural disasters such as flooding, drought, earthquakes and cyclones. In the past few years, it has been affected by severe flooding due to tropical storms causing thousands of deaths and millions in damages. The impact of these disasters is felt mainly in rural areas, where economic livelihoods are dependent on agriculture and food security is a major issue. The Lao military plays a critical role in all phases of disasters, and is responsible for preparing and training for operations with lead or supporting roles in the pre-disaster, response, and early recovery phases. However, it has limited resources and capabilities.

Laos experienced one of its worst natural disasters in 2013, when five major monsoon storms struck the country in a period of three months. Approximately 347,000 people were affected by severe flooding in that disaster.

Local authorities have been unable to gauge the extent of the damage 24 hours after the collapse of the dam. Rescue teams from across the nation have been joined by regional neighbours and other countries offering assistance. “We do not have any formal information yet about any casualties or how many are missing. We sent rescue teams who will help them and provide basic assistance first,” said an official in Attapeu province. Boats were brought in to try to evacuate victims left stranded in San Sai district. Prime Minister Thongloun Sisoulith, called on government organizations, the police and the military for assistance in the emergency relief effort.

Laos is traversed by a vast network of rivers and, currently there are 10 dams in operation with another 10-20 under construction, and dozens more in planning stages. It is often nicknamed the “battery of Asia” as it exports two-thirds of its hydropower to neighbouring states. 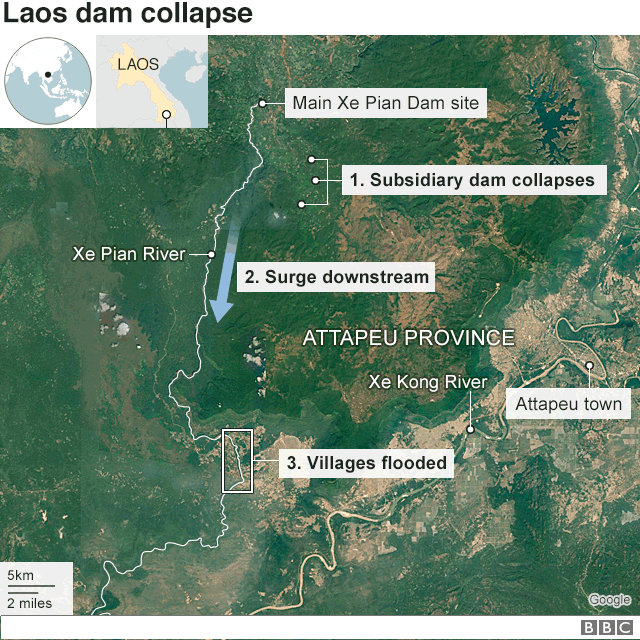 Saddle Dam D, a part of the the Xe-Pian Xe-Namnoy hydroelectric power project, had fractured after heavy rainfall on July 22.  “The incident was caused by continuous rainstorm which caused high volume of water to flow into the project’s reservoir,” officials stated. The $1.2 billion project is a joint venture project by Vientiane-based Xe Pian Xe Namnoy Power Company (PNPC) as well as Thai company Ratchaburi Electricity Generating Holding, South Korea’s Korea Western Power and state-run Lao Holding State Enterprise. The dam, with a 410 megawatt capacity, was projected to begin operating by 2019. The project also consisted of a series of dams over the Houay Makchanh, the Xe-Namnoy and the Xe-Pian rivers in Champasak Province. The project had planned to export 90 percent of its electricity to Thailand, with the remaining amount to be offered up on the local grid.

The construction of dams in Laos has long been a controversial subject with fears over environmental damage and the impact on communities who are often displaced. Lao media is state-controlled with authorities keeping tight control over information. Therefore, there is a lack of transparency about business deals and development projects.

The US-based International Rivers group, who works to save rivers and the communities dependent on them, stated that the accident demonstrated that some dam designs were unable to cope with extreme weather conditions. However, these concerns were allegedly dismissed by the government.

Our assessment is that the intensity and frequency of natural disasters in the Laos will likely increase due to climate change. We believe that the inadequacy of the warning systems was ineffective in ensuring the safety of citizens. We feel that the country’s focus on utilizing hydroelectric energy sources might provoke a backlash from environmental activists. We also believe that the frequency of floods will further exacerbate the already fragile livelihoods of several communities.