Jair Bolsonaro of Brazil’s Social Liberal Party has won the Brazilian presidential elections. Bolsonaro’s campaign was marked by his similarities to populist politicians in the United States and Hungary. His victory was a result of Brazilians, who are angry at the corruption and rising rates of violent...

Jair Bolsonaro of Brazil’s Social Liberal Party has won the Brazilian presidential elections. Bolsonaro’s campaign was marked by his similarities to populist politicians in the United States and Hungary. His victory was a result of Brazilians, angry at the rise in corruption and rates of violent crime, voting dramatically against the status quo.

Brazil is the world's fifth-largest country in the world and the sixth most populous. Its capital is Brasília, and the most populated city is São Paulo.

Brazil was inhabited by numerous tribal nations prior to explorer Pedro Álvares Cabral’s arrival in 1500. Cabral claimed the area for the Portuguese Empire, and Brazil remained a Portuguese colony until 1808 when the capital of the empire was transferred from Lisbon to Rio de Janeiro. In 1815, the colony was elevated to the rank of kingdom upon the formation of the United Kingdom of Portugal, Brazil and the Algarves. The country became independent in 1822 with the creation of the Empire of Brazil. The country became a presidential republic in 1889 following a military coup d'état. An authoritarian military junta came to power in 1964 and ruled until 1985, after which civilian governance resumed.

In 2017, Brazil was besieged by misfortune: it was hit by the worst recession in its history (it’s growth rate now is still 8% lower than it was in 2014); interlinked corruption scandals, known collectively as the “Car Wash”, which implicated all big political parties, and rising levels of violence. In 2017, the number of murders reached a record of 64,000. Nevertheless, Brazil remains one of the most influential countries in the region. 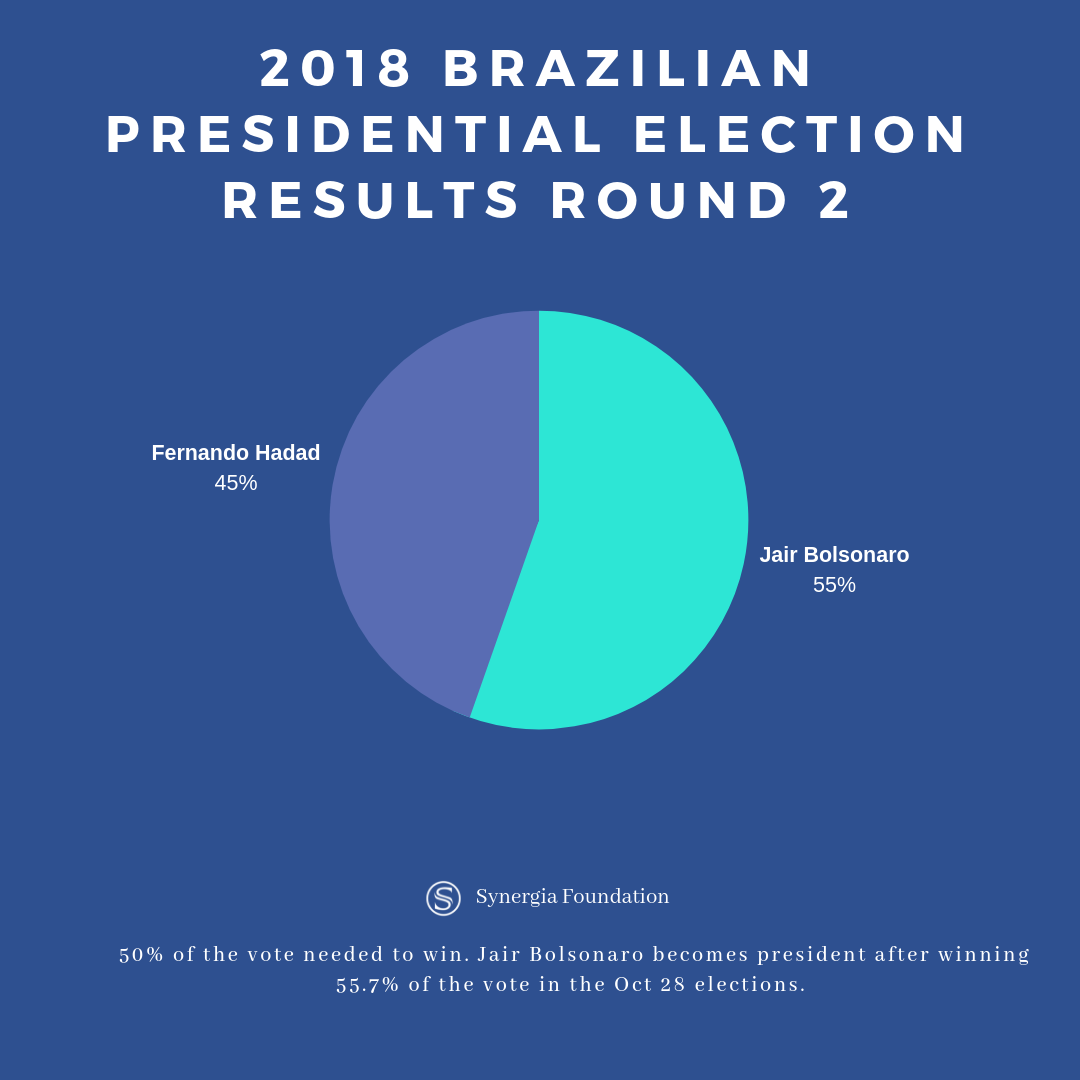 Jair Bolsonaro, the far-right lawmaker and former army captain, defeated leftist Fernando Haddad in Brazil’s runoff elections, receiving about 55 per cent of the vote. His win adds Brazil to a growing list of countries, from the United States to Hungary to the Philippines, where staunch right-wing nationalists have won at the ballot box. The 63-year-old nationalist rode a wave of voter rage to Brazil’s presidency on Sunday, marking the most dramatic shift to the right in Latin America’s largest country since the end of the Cold War-era military dictatorship. Bolsonaro ran a social-media-centred campaign similar to US President Donald Trump’s, promising to attack the corruption of political elites and bring an iron fist to fighting crime. He demonized opponents and polarized the nation with his history of denigrating women, gays and minorities. He has spoken of being inspired by dictatorships, is in favour of extrajudicial killings, and is better known for the extremism of his rhetoric than for having achieved anything during his seven years in Congress.

The election occurred in a period when faith has collapsed in Brazil’s corruption-stained political class, the economy has floundered and gang killings have surged, leaving the nation feeling rudderless and besieged. Haddad ran largely as a stand-in for Luiz Inácio Lula da Silva, the popular former president, whose re-election bid was upended when he landed in jail this year on corruption charges. Haddad received about 45 per cent of the vote.

Bolsonaro launched his campaign with no significant political allies, a small party machine and a paltry budget. He overcame those challenges with the power of social media, speaking directly to voters through angry all-caps tweets and Facebook Live videos.

His simplistic, get-tough solutions to Brazil’s deep-rooted problems of crime and corruption played well online, and he developed a movement of followers that included pro-gun and evangelical voters that some analysts compared to Trump’s supporters in 2016. Outside Bolsonaro’s house in Rio de Janeiro on Sunday, his supporters rallied in the green and yellow of the Brazilian flag, pointing their fingers in the shape of a gun, Bolsonaro’s trademark gesture.

Even as Bolsonaro was sidelined from the campaign in September when he was stabbed in the abdomen at a rally, his popularity grew.

He has convinced supporters that he will upend the status quo. To reduce crime, he has advocated that gun laws be relaxed so civilians could fight fire with fire. To fix Brazil’s ailing economy, Bolsonaro argues that indigenous lands and the vast Amazon region should be opened up for development.

Long seen as an economic protectionist, Bolsonaro did an about-face during the campaign, embracing the free market, but kept nationalists on his side by vilifying China for “buying up” Brazil. Many Brazilians seem to overlook Bolsonaro’s more abrasive qualities in their search for meaningful change.

Our assessment is that Bolsonaro’s win marks a diametric shift for Brazil, a nation dominated for most of the past decade and a half by the leftist Workers Party. We believe that President Bolsonaro’s outspoken support of the military dictatorships of the 20th century is troubling and that in their effort to challenge the status quo, Brazil may have opted for a candidate who could pose a threat to their democracy. It is our hope that under Bolsonaro’s leadership, the problems of violent crime and corruption are finally addressed.