The value of Bitcoin has continued to rise in 2017, especially in the past few weeks. Experts have now suggested, given its vertiginous ascent, it could soon be valued..

The value of Bitcoin has continued to rise in 2017, especially in the past few weeks. Experts have now suggested, given its vertiginous ascent, it could soon be valued at $10,000. The cryptocurrency has gained more than a fifth in value in the span of three days.

Bitcoin is a peer-to-peer electronic cash system. It is a digital currency in which encryption techniques are used to regulate the generation of units of currency and verify the transfer of funds, operating independently of a central bank. It was first created in 2008 by either an anonymous programmer or a group of programmers under a pseudonym, Satoshi Nakamoto. Speculation is rife over the real identity of the person who created the system. It was in 2009 when “Nakamoto” released Bitcoin as an open source software. Given that it is a decentralized electronic currency, it cannot be controlled by any government. It is one of the most popular cryptocurrencies in the world. Litecoin, Peercoin, Namecoin and Ripple are among the other cryptocurrencies available.

Bitcoin is a community-run system. It has often been referred to as the first “start-up currency”. By the beginning of 2015, there were 100,000 merchants and vendors who accepted Bitcoins as payment. Bitcoins have been used in illegal trade online as well. Critics argue that digital cash systems are volatile and speculative in nature and comes with a number of inherent risks.

On October 20th, 2017, the value of Bitcoin surged to a record high of more than $6,000. Additionally, its market capitalization at one point soared to $100 billion. 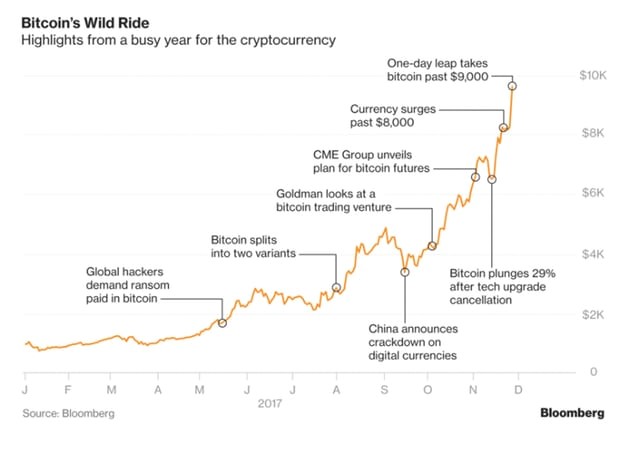 The value of Bitcoin has continued to rise in 2017, especially in the past few weeks. Experts have now suggested, given its vertiginous ascent, it could soon be valued at $10,000. The cryptocurrency has gained more than a fifth in value in the span of three days.

“$10k is on the cards and bitcoin seems to be straining at the leash to reach it,” said Charles Hayter, founder of cryptocurrency data anaylsis website Cryptocompare. He added, “Promises of bitcoin futures opening the door to institutional money are supercharging the price.”

Opinions on cryptocurrencies like Bitcoin are deeply among experts. In September 2017, JPMorgan Chase CEO Jamie Dimon called bitcoin "a fraud.” Some have opined that it looks like an unsustainable bubble. Countries like China have tried to curb the rise of cryptocurrencies by banning cryptocurrency exchanges but nothing has deterred Bitcoin’s rise.

Hussein Sayed, chief market strategist at FXTM, notes that Bitcoin will continue to rise in the near future as well. He also expects more investors to join the Bitcoin bandwagon. He noted, “From a fundamental perspective it is still almost impossible to give the cryptocurrency a fair value, however, there has been a strong correlation between the price of Bitcoin and number of users opening new wallets. It is not just retail investors showing interest in the cryptocurrency, but many hedge funds have decided to join the party recently by including Bitcoins in their portfolios. Given that number of users haven’t exceeded 0.1% of the global population, there’s still more potential for this momentum trade to continue. Whether the price will be justified in the foreseeable future, depends on the adoption and the application of the new currency, but so far it still looks unstoppable.”

Our assessment is that Bitcoin has presented itself as a credible form for financial transaction. We believe that investors fearing mismanagement of monetary policies of central banks or currency fluctuations in ailing economies will opt for decentralized cryptocurrencies that provide them with more control. It is highly likely that Bitcoin value might touch $10,000 before 2017 ends.