The Central Asian Republic of Kazakhstan made headlines as protesters stormed through several cities, wreaking havoc in an otherwise balmy country. The peaceful democratic protests had turned violent overnight, raising several questions about the state of democracy in Central Asia. The hardline stance taken by President Tokayev, which insisted on foreign intervention for the re-establishment of order, has become an issue of much deliberation.

Kazakhstan is the largest landlocked country in Asia, sharing borders with Russia and China. The former Soviet state is an oil-rich region, apart from being strategically located in the midst of the Asian mosaic. It is a nascent economy, which became free from the Soviet yoke only in 1991 and has since been under the leadership of Nursultan Nazarbayev, a former Communist strongman. During his tenure, he had succeeded in instituting a farcical democracy in the Central Asian country, which became a symbol of stability in an otherwise turbulent neighbourhood.

However, the democracy was only procedural, considering it was marked by rigged elections, detention of opposition leaders and gagging of the press. Prior permissions were required even for exercising the right to protest. Mr. Nazarbayev had clung to power, establishing himself in a position of absolute authority. So much so that when he stepped down in 2019, his successor– Mr. Tokayev, was said to have been handpicked by Mr. Nazarbayev, while the latter continued to call the shots as the Chairman of the Security Council.

With prices of liquefied petroleum gas skyrocketing in the country, popular discontent was high, which eventually culminated in peaceful protests in West Kazakhstan, starting at Zhanaozen. Protests in solidarity were held throughout the country, including Almaty, the largest Kazakh city. Overnight, the people’s protest turned violent and bloody, leading to large scale defacing, destruction and loss of life.

Protests in Kazakhstan were illegal to begin with, and the unexpected turn of events gave the government ample space to invite foreign intervention. The Russia-led Collective Security Treaty Alliance, dubbed as a feeble attempt at a Moscow-led NATO, sent its peacekeeping forces into the country, making it the first such military intervention by the grouping. 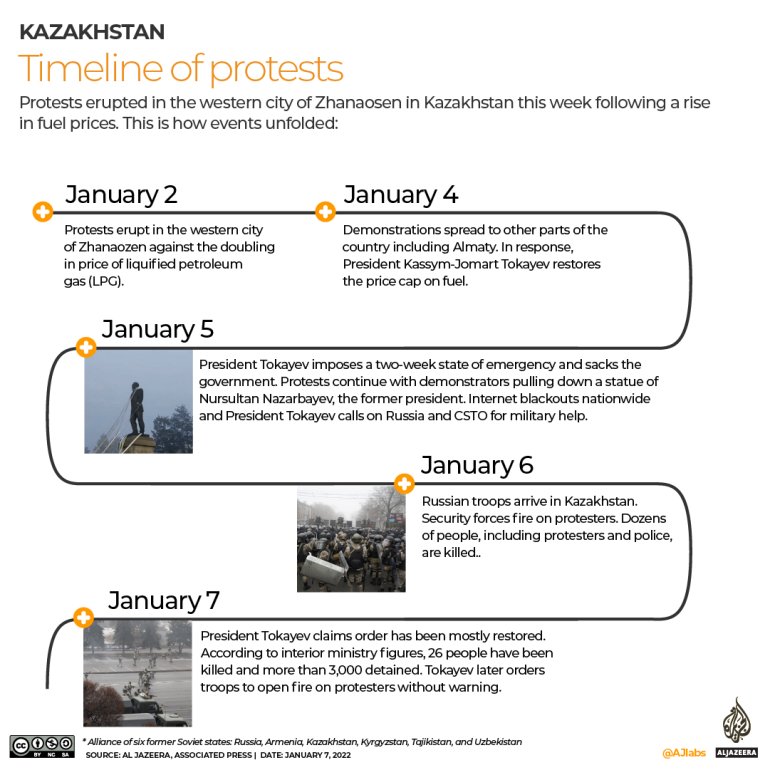 The current crisis opens up two significant issues regarding the Republic of Kazakhstan - the first being the extent and form of democracy that exists in the country, and the second being the extent to which the Russian intervention depicts the changing stakes in regional politics.

‘Democracy’ is essentially a foreign concept in Central Asia. The region is dominated by powerful autocratic regimes, and the establishment of an imported ideology demands immense political will. The essence of democracy, whether liberal or communist, lies in ‘mass support’ for the party in power. Successive dictatorial regimes and foreign occupations have discouraged such mass political participation.

For democracy to take root, a coherent national identity becomes a prerequisite. With Kazakhstan being a mosaic of varied ethnicities (minorities make up 57 per cent of the population), the cohesion of fragmented communities would have required an enabling environment. However, after breaking away from the erstwhile USSR, the country was led by Mr. Nazarbayev, who made himself the sole point of political authority. His regime had witnessed the concentration of power and wealth in a few hands, the development of oligarchic systems, fabricated elections and the brutal crushing of protests and the opposition. As a result, when peaceful democratic protests broke out across the country, the government did not have a systematic machinery in place to respond to the same.

Its general reluctance to listen to popular opinion also led to increasing disaffection with the government, culminating in mass demonstrations. The public refused to accept minor policy reformations, which were intended to console them. However, the overnight turn of events and the sudden violent outbreak of protests in Almaty generated suspicion regarding the cause of the protests. Of course, one cannot discount the involvement of fringe elements and violent groups who took advantage of the existing situation. Nevertheless, it was politically convenient for the government to shift its narrative from governmental incompetence to national defence. The ‘sudden chaos’ gave the autocratic regime a perfect opportunity to blame the situation on “foreign terrorist groups intervening in internal matters”.

Under this pretext, Mr. Tokayev sought the intervention of the Collective Security Treaty Organisation. While the government claimed to launch a war against terrorism, Kremlin got its much-awaited chance to play ‘Big Brother’ in the former USSR neighbourhood by sanctioning the first-ever CSTO military intervention in a member country.

The myth of Kazakh political stability was busted when CSTO peacekeeping forces entered the country to restore order. Mr. Tokayev's course of action was allegedly prompted by the unstable internal politics of the country. The existence of two leaders, one at the helm of affairs and the other shrouded in shadows, has inevitably created dual centres of power, dividing the small group of elites into two. Given the long legacy of Mr. Nazarbayev, he ought to have more loyalists than his relatively new successor. The rift between the two became apparent when Mr. Nazarbayev was dismissed from the Security Council.

Rumours are rife that the violence could have had its inception in party politics, considering that party affiliations of the perpetrators remain unknown. With more political elites having allegiance to Mr. Nazarbayev, the current premier could not garner sufficient trust in the country's domestic security framework. This led him to seek foreign help and assistance to quell a rebellion, believed to have been ‘staged’ in order to destabilise the regime.