Bhutan: PDP loses in the first round

The Himalayan kingdom of Bhutan votes to remove incumbent PM and his People’s Democratic Party (PDP). Druk Nyamrup Tshogpa (DNT) the party headed by Dr. Lotay Tshering, and the Druk Phuensum Tshogpa (DPT) under the leadership of Pema Gyamtsho will face each other in...

The Himalayan kingdom of Bhutan votes to remove incumbent PM and his People’s Democratic Party (PDP).

Druk Nyamrup Tshogpa (DNT) the party headed by Dr. Lotay Tshering, and the Druk Phuensum Tshogpa (DPT)  under the leadership of Pema Gyamtsho will face each other in the final round of general elections on October 18th.

Bhutan is a landlocked, parliamentary monarchy situated in South Asia, bordering India and the Tibetan Autonomous Region in China. It has a population of 800,000 people and is the only country in the world which is carbon-negative (which means the country absorbs more carbon than it produces).

Bhutan became a centre for conflict in 2017 when India and China became embroiled in a military standoff over the Doklam plateau high in the Himalayas claimed by both Beijing and Bhutan.

New Delhi does not claim the territory but has a military presence in Bhutan. It stepped in to prevent Chinese border guards from building a road there, prompting Beijing to accuse it of trespassing on Chinese soil. 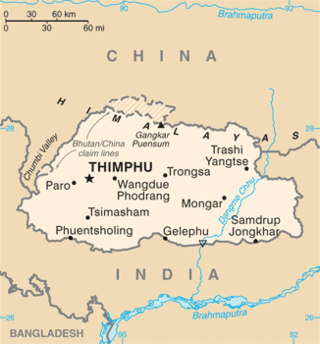 Bhutan’s foreign relations and defence are heavily dependent on neighbouring India, which also takes care of its key exports, energy requirements and transportation needs. Both countries have enjoyed friendly relations since India’s independence and have frequently conducted bilateral visits, joint conferences and have multiple agreements.

Despite the warm relations, India abruptly withdrew subsidies for kerosene and cooking gas imports, just before Bhutan’s second elections in 2013, which was seen as an attempt to coerce a change of government.

Bhutan's prime minister conceded defeat after the ruling party was knocked out in the first round of the small Himalayan nation's third-ever election. Harvard educated Tshering Tobgay was seeking a second term in the poll but fell short of two rival parties, who will contest a runoff on October 18. Election officials said Druk Phuensum Tshogpa (DPT), which won Bhutan's first-ever election when the kingdom transitioned to democracy in 2008, attracted nearly 93,000 votes, narrowly beating Druk Nyamrup Tshogpa (DNT).

‘I congratulate DNT and DPT and their candidates (on) their outstanding performance,’ Tobgay posted on Twitter. Tobgay, a 52-year-old mountain-biking enthusiast, and his People's Democratic Party won power from the opposition in 2013. More than 291,000 people cast their vote in Saturday's poll for a 66% turnout of registered voters.

Bhutan got television in 1999 and democracy arrived only in 2008 when its "dragon kings" ceded absolute power. However, it has tried to shield itself from the downsides of modernisation, striving for Gross National Happiness, being carbon-negative and keeping tourist numbers down with a daily fee of US$250 per visitor in high season.

Opinion polls are banned and analysts are thin on the ground but the PDP had an edge over its handling of the economy, with growth strong and unemployment low. Corruption, rural poverty, youth unemployment and the prevalence of criminal gangs remain the major challenges.

Bhutan is heavily dependent on its neighbour India for aid, infrastructure investments, imports and as an export market, in particular, for electricity, it generates using hydroelectric power. However, India is unhappy about China's growing influence in Bhutan. Last year India and China became embroiled in a military stand-off over the Doklam plateau high in the Himalayas, a region claimed by both China and Bhutan.

Despite the defeat of the incumbent PM, Bhutan’s policy towards India is likely to remain unchanged. Both remaining parties in the election have a positive outlook towards New Delhi. Unlike Nepal, Bhutan’s political parties overwhelmingly favour India. Some analysts argue that Bhutan is in a more vulnerable strategic position than Nepal, hence it depends on India to fend off any Chinese aggression, as seen in Doklam last year.

In a more critical tone, the Doklam stand-off could be seen as China’s way of showing Bhutan that New Delhi is inadequately prepared to defend the kingdom in case of future foreign aggression. China has been rapidly encircling India by means of strategic partnerships or military presence, with the latest being Nepal’s newly-elected majority communist government. It is logical to assume that Beijing wants Bhutan to exit India’s sphere of influence.

Our assessment is that both the DPT and DNT will try to strengthen their ties with India as mentioned in their respective manifesto. We believe that Bhutan will continue to stand by India as it did in Doklam even as China tries hard to make inroads in the Himalayan state. We feel Bhutan is not open to the idea of establishing a formal relationship with any of the five permanent members of the UN Security Council.