In October 2017, State Bank of India, sanctioned loans worth $357 million to seven companies for installations of solar rooftops with aggregate capacity of 575 megawatt.

India is a developing economy that is one of the fastest growing economies in the world. As the nation continues to progress, its energy needs has also increased. The energy policy of India is largely defined by the country's expanding energy deficit. The country has also increased focus on developing alternative sources of energy, particularly nuclear, solar and wind energy. In terms of self sufficiency, India ranks 81 in the world.

One of the main initiatives that was introduced by the Indian government to promote solar power is the Jawaharlal Nehru National Solar Mission. It is one of the initiatives that is part the National Action Plan on Climate Change. Inaugurated in 2010, the program has a target of 20GW by 2022. The new government has expanded the target to 100 GW.  India increased its solar power generation capacity by nearly 5 folds from 2,650 MW in 2014 to 12,288.83 MW in 2017.

Currently, the world’s largest solar plant is in India in a region called Kamuthi in Tamil Nadu. It has the capacity of 646 megawatts. The plant will have 2.5 million solar panels covering an area of 10.36 square kilometers. It cost $679 million to build and is capable of powering an equivalent of 150,000 homes.

"India is expected to become the world's third biggest solar market from next year onwards after China and the US," said a Bridge to India spokesperson. Bridge to India is a consultancy firm that specializes in renewable energy. The spokesperson stated, “India is expected to add new solar capacity of 5.1 GW this year, which is a growth of 137 per cent over last year.”

Nearly 300 million Indians do not have electricity in the country. In 2016, India’s power ministry said that the country’s per capita consumption is significantly lower than the world average. Additionally, large swaths of India are plagued by rampant power cuts. 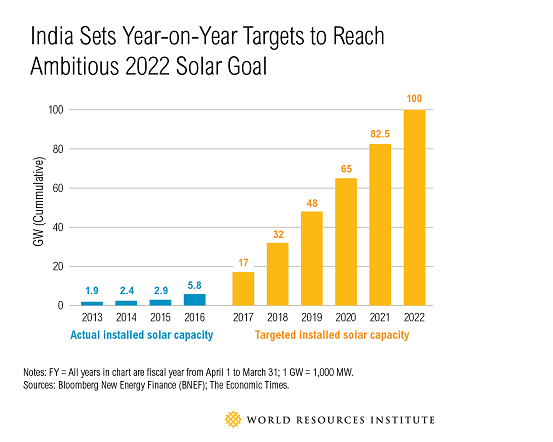 In May 2016, the World Bank approved a $625 million loan to support the Government of India’s program to generate electricity from widespread installation of rooftop solar photo-voltaic (PV). The Board also approved a co-financing loan of $120 million on concessional terms and a $5 million grant from Climate Investment Fund’s (CIF) Clean Technology Fund. The project will finance the installation of at least 400 MW of Grid Connected Rooftop Solar Photovoltaic (GRPV) across India.

At the time, Onno Ruhl, World Bank Country Director in India said, “India is endowed with huge solar energy potential, and the World Bank is strongly supportive of the government’s plans to harness this potential and increase India’s solar PV capacity to 100 GW. This project will support this target, by providing financing to some of the 40 GW of solar PV which will be placed on rooftops. Solar PV will not only improve access to electricity, but it will do so in a manner that avoids the environmental impacts of other traditional electricity sources. Through this project and others like it, tens of millions of electricity customers will eventually be able to generate part of their own electricity needs, from one of the cleanest sources of energy.”

In October 2017, State Bank of India, sanctioned loans worth $357 million to seven companies for installations of solar rooftops with aggregate capacity of 575 megawatt. This is connected to the loan provided by the World Bank. This is a joint program between the two financial bodies.

The Chairman of SBI Rajnish Kumar said, “We are comfortable with the sector because at least many risks which are normally associated with thermal power projects are not there. Only thing is we have to see the commercial viability apart from the usual credit due diligence.”

The six companies that SBI will lend to in the latest round to set up solar projects are JSW Energy, Hinduja Renewables, Tata Renewable Energy, Adani Group, Azure Power, Cleantech Solar and Hero Solar Energy.

In October 2017, Indian government announced a capital infusion plan of $32.43 billion into public sector banks over the next two years. The State Bank of India, the largest bank in the country, is one of them.

Our assessment is that one of the key ways to address energy deficit in India is by investing in clean energy like solar power. As a signatory of the Paris Climate Agreement, India has set an ambitious goal of expanding on its solar program. It is also economically sound as it has been estimated that India’s clean energy sector could generate over 300,000 new jobs by 2020.