The possibility of peace between Israel and Palestine seems bleaker with each passing day. The problem has further been affected by US President Donald Trump’s..

The possibility of peace between Israel and Palestine seems bleaker with each passing day. The problem has further been affected by US President Donald Trump’s controversial decision to recognize Jerusalem as the capital of Israel – a move that has largely been condemned by the international community.

However, a significant number of people on both sides still support a two-state solution in principle. Can it be finally achieved?

On May 14, 1948, David Ben-Gurion, the head of the Jewish Agency, proclaimed the establishment of the State of Israel. U.S. President Harry S. Truman recognized the new nation on the same day.

Soon after President Truman took office, he appointed several experts to study the Palestinian issue. In the summer of 1946, Truman established a special cabinet committee under the chairmanship of Dr. Henry F. Grady, an Assistant Secretary of State, who entered into negotiations with a parallel British committee to discuss the future of Palestine.

On November 29, 1947, the United Nations adopted Resolution 181 (also known as the Partition Resolution) that would divide Great Britain’s former Palestinian mandate into Jewish and Arab states in May 1948 when the British mandate was scheduled to end. Under the resolution, the area of religious significance surrounding Jerusalem would remain a corpus separatum under international control administered by the United Nations.

Although the United States backed Resolution 181, the U.S. Department of State recommended the creation of a United Nations trusteeship with limits on Jewish immigration and a division of Palestine into separate Jewish and Arab provinces but not states. 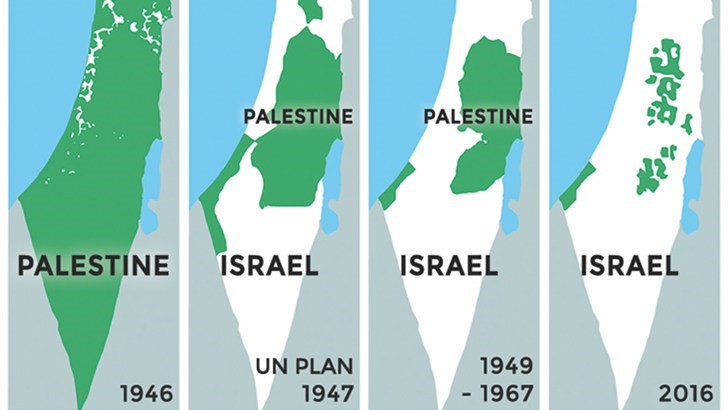 The Oslo accords of the mid-1990s would have led to peace had it not been for the tragic assassination of the Israeli prime minister Yitzhak Rabin in 1995. The 1998 Wye River Memorandum and its commitment to further Israeli withdrawals from the West Bank would have been implemented if only the Israeli Labor party had joined Benjamin Netanyahu’s coalition to back the agreement.

The Camp David summit in July 2000 would have succeeded if the US had been less sensitive to Israeli domestic concerns, insisted on a written Israeli proposal, consulted the Arab states at an earlier phase, and taken the more firm and balanced position adopted half a year later, in December 2000, when President Clinton outlined parameters for an agreement. Both parties could have accepted the Clinton parameters, as a one-time offer that would disappear when Clinton stepped down less than a month later.

The negotiations in Taba, Egypt, in January 2001 were on the brink of the agreement but failed because time ran out, with Clinton just out of office, and Ehud Barak facing almost certain electoral defeat to Ariel Sharon. The two major peace plans of 2003 – the US-sponsored road map to peace in the Middle East and the unofficial Geneva accord – could have been embraced had it not been for a bloody intifada and a hawkish Likud prime minister in power.

The direct negotiations between the Palestinian president Mahmoud Abbas and Netanyahu in 2010 could have lasted more than 13 days if only Israel had agreed to temporarily halt construction of some illegal settlements in exchange for an extra $3bn package from the United States.

Several years of secret back-channel negotiations between the envoys of Netanyahu and Abbas could have made history if only they hadn’t been forced to conclude prematurely in late 2013, because of an artificial deadline imposed by separate talks led by US Secretary of State John Kerry. In addition, the Kerry negotiations of 2013–2014 could have led to a framework agreement if he had spent even a sixth as much time negotiating the text with the Palestinians as he did with the Israelis. Some have also argued that he made inconsistent promises to the two sides regarding the guidelines for the talks, the release of Palestinian prisoners, curtailing Israeli settlement construction, and the presence of US mediators in the negotiating room.

Beyond national-level politics, there is a greater readiness on the part of Israelis and Palestinians to talk to one another that might seem to be the case. Some Palestinians are plainly unwilling to talk to Israelis and reject ‘normalization’ with Israel while movement restrictions remain in place and settlement expansion continues. However, a Chatham House workshop in East Jerusalem last November demonstrated that there are Palestinians who are prepared to take part in exchanges with Israeli counterparts.

Experts also believe that the existence of a good deal of practical cooperation in business, including in the tech industry – where restrictions on physical movement are less problematic and the possibilities for cooperation are considerable. And whether in tech or in other areas of activity, parts of society that have often been underrepresented in discussions about peace – such as youth, women and religious people – can play an expanded role.

However improbable it might seem right now, the coincidence of some or all of these factors could create a more positive dynamic between Israelis and Palestinians, at several levels. That in turn could re-energize an international community grown weary of the apparent intractability of the conflict and pre-occupied with other matters.

Our assessment is that the ongoing conflict between Palestine and Israel is highly complex and layered. It has to be approached through thoughtful mediation and parties involved should be willing to make compromises in order to achieve lasting peace in the region. However, US President Trump’s decision to recognize Jerusalem as Israel’s capital will likely hinder future peace talks between the two regions as Jerusalem is considered vital to both regions.