China’s ambitious multi-nation project is facing a massive hurdle as some countries are being buried under Chinese debt. The “New Silk Road" envisions the construction of railways, roads and ports across the globe, with Beijing providing billions of dollars in loans to many countries. China has initiated a Twenty-First..

China’s ambitious multi-nation project is facing a massive hurdle as some countries are being buried under Chinese debt.

The “New Silk Road" envisions the construction of railways, roads and ports across the globe, with Beijing providing billions of dollars in loans to many countries.

China has initiated a Twenty-First Century Maritime Silk Road – ‘One Belt One Corridor’ that focuses primarily on connecting and encouraging cooperation among Eurasian countries. The emphasis is on enhancing land as well as maritime routes. The policy is significant for China as it aims to boost domestic growth in the country. It is part of China’s strategy for economic diplomacy as it underlines China’s goal to undertake a larger role in global affairs.

The strategy underlines China's push to take a larger role in global affairs with a China-centered trading network. The future of trade in Asia could depend heavily on what becomes of China’s expansive One Belt, One Road initiative.

First announced in 2013 by President Xi Jinping, the initiative, also known as the "new Silk Road", envisions the construction of railways, roads and ports across the globe, with Beijing providing billions of dollars in loans to many countries. Five years on, Xi has found himself defending his treasured idea as concerns grow that China is setting up debt traps in countries which may lack the means to pay back the Asian giant. 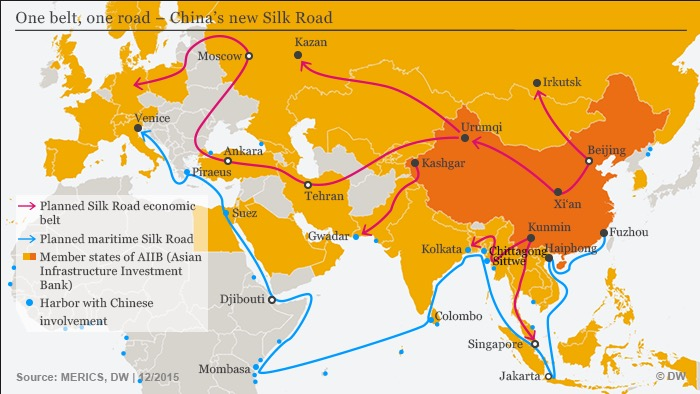 Read more about our extensive analysis on the BRI debt burden on Malaysia here as well as our analysis on India refusing to join the BRI-Counter program.

China’s ambitious multi-nation and multi-billion-dollar connectivity project is facing an expected hurdle: the countries China is investing in cannot bear the burden of the loans China is “granting them” to “build their infrastructure”.

During a visit to Beijing in August, Malaysia's Prime Minister Mahathir Mohamad said his country would shelve three China-backed projects, including a US$20 billion railway.

The party of Pakistan's new prime minister, Imran Khan, has vowed more transparency amid concerns about the country's ability to repay Chinese loans related to the multi-billion-dollar China-Pakistan Economic Corridor.

Sri Lanka has already paid a heavy price for being highly indebted to China. Last year, the island nation had to grant a 99-year lease on a strategic port to Beijing over its inability to repay loans for the US$1.4-billion project.

The BRI’s biggest criticism has been its unclear funding structure. If a country accepts a project to be developed under the BRI program, China will offer loans either from one of the two largest National Banks or from the Silk Road Fund. Chinese companies will spearhead the development of these projects with domestic companies playing a minor part. Therefore, the host countries are effectively borrowing money from China to fund Chinese companies which will build Chinese-owned projects on their territory.

Mohamed Nasheed, former Maldivian President, is correct when he says that China’s actions in the Indian Ocean archipelago amount to a "land grab" and "colonialism". Beijing owns 80% of Maldives’ current debt.

China has previously written off any criticism of its controversial funding program in the BRI. At a daily press briefing on Friday, foreign ministry spokeswoman Hua Chunying denied that Beijing was saddling its partners with onerous debt, saying that its loans to Sri Lanka and Pakistan were only a small part of those countries' overall foreign debt.

"It's unreasonable that money coming out of Western countries is praised as good and sweet, while coming out of China it's sinister and a trap," she said.

China's loans are quoted in dollar terms, but in reality, they're lending in terms of tractors, shipments of coal, engineering services, and they ask for repayment in hard currency. Standard & Poor's said Beijing structures the infrastructure projects as long-term concessions, with a Chinese firm operating the facility for a period of 20 to 30 years while splitting the proceeds with the local counterpart or government.

Our assessment is that the BRI initiative will continue its funding model as China has carefully offered their loans to countries which desperately need basic infrastructure. We believe, however, that we can see further cancellations of BRI projects in South Asia, especially in countries which have a maritime dispute with Beijing. We feel that China’s response will be on the lines of a criticism directed towards Washington and the US’s inability to see the prosperity in the region.