The Sudanese President has appointed a new PM in an attempt to reboot the crisis-hit economy. Sudan was once one of the largest countries in Africa. It is also a region that is geographically diverse and is rich in resources such as petroleum, iron ore, copper, zinc, silver, gold, hydropower and more. But through the decades the region..

The Sudanese President has appointed a new PM in an attempt to reboot the crisis-hit economy.

Sudan was once one of the largest countries in Africa. It is also a region that is geographically diverse and is rich in resources such as petroleum, iron ore, copper, zinc, silver, gold, hydropower and more. But through the decades the region is plagued by problems. Since becoming politically independent in 1956, proxy wars took place between Sudan, Chad and Libya which caused instability. In the 1980s, despite there was widespread famine.  The first civil war ended in 1972 but the second war began in 1983. During this period, reportedly four million were displaced and two million died. Thus, the region came to be increasingly militarized. But the worst was still yet to come.

Omar al-Bashir has ruled Sudan since 1989, and has overseen a relatively stable period since then. However, his rule has been marked with a massive humanitarian crisis, the splitting of his country in 2011, and a dozens of cases of human rights violations.

In 2009, Sudan’s President, Omar al-Bashir became the first sitting president to be indicted by the International Criminal Court. He was charged with allegedly directing much of this genocide which included mass killing and rape of the people of Darfur. Despite the fact there is an international warrant in his name, he has “won” consecutive elections in 2010 and 2015. 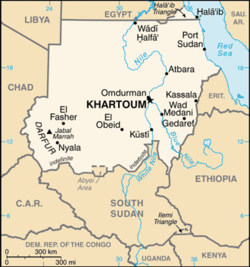 Read more about our extensive analysis on the Sudanese conflict here and here.

Moussa had been serving as minister of irrigation and electricity before the government was dissolved.

Saleh, who had been serving as both prime minister and vice president before the shake-up, will stay on in the newly created post of first vice president, while Osman Yusuf Kubur was appointed second vice president. The announcement came just after Bashir called an emergency meeting of ruling party officials in the presidential palace on the back of growing economic concerns over price rises and shortages.

No other ministerial appointments were announced, but the number of ministries in the new government will be slashed to 21 from 31, a move intended to cut down on spending, National Congress Party Deputy Chairman Faisal Hassan told a news conference.

The ministers of foreign affairs, defence and presidential affairs will remain in their posts when the new government is formed.

Khartoum has been trying to slash expenditures as it grapples with record high inflation, the hard-currency shortage and growing concern over low levels of liquidity at commercial banks.

Long queues outside commercial banks have become a fixture around Khartoum in recent weeks as the liquidity of the local currency has dwindled and ATMs have been emptied of cash. Daily withdrawal limits in some places have been set as low as 500 Sudanese pounds ($16.60).

According to the analysts, the latest measures are necessary to solve “the state of distress and frustration faced by the country” during the last few years.

Sudan’s economy has been struggling since the south seceded in 2011, taking with it three-quarters of oil output and depriving Khartoum of a crucial source of foreign currency.

The lifting of 20-year-old U.S. trade sanctions last year was expected to usher in a more prosperous era for a country that had long been isolated. However, economic woes have only deepened as a black market for U.S. dollars has in effect replaced the formal banking system, making it more difficult and expensive to import essential supplies such as wheat.

A doubling of the price of bread in January, after the government eliminated subsidies, triggered country-wide demonstrations.

Our assessment is that Sudan’s economy is unlikely to improve in the near future as investors feel more uncomfortable as  Sudanese Central Bank is functioning without a Governor.  This will keep foreign investors away until Bashir can establish a sense of order in his cabinet and better manage the country’s economy. The region is still embroiled in violence and more than half of its 37 million people live below the poverty line. We believe that recent lifting of the economic sanctions has to be followed by serious political and economic policy reforms if the country is to realize the benefit.