On August 2nd, Ms Nancy Pelosi, the U.S. House of Representatives Speaker, arrived at Songshan Airport in Taiwan, making her the first senior U.S. leader to visit the island nation in 25 years. The controversial visit comes at a time when China and the U.S. have locked horns over the future of Taiwan.

Pelosi stated that her visit was to show America’s commitment and support for the people of Taiwan and their democratic values.

On August 3rd, Pelosi met the President of Taiwan, Tsai Ing-wen, to discuss the ongoing crisis with China. Pelosi also addressed the Taiwanese parliament, highlighting the new bill passed in the U.S. to increase its local semiconductor production. Pelosi stated that the legislation would "offer greater opportunity for U.S.-Taiwan economic cooperation."

Speaker Pelosi left Taiwan on Wednesday after a day of discussions with the president of Taiwan, prominent lawmakers, executives, and human rights activists. By that point, China's navy had already positioned to encircle Taiwan with live-fire military simulations. So far, China has already fired nine ballistic missiles, out of which five have landed in Japanese waters, leading to renewed tensions.

The impasse evokes memories of the Third Taiwan Strait Crisis, an episode between 1995 and 1996. During that incident, China launched missiles and live ammunition into Taiwanese waters to exert pressure ahead of a presidential election and to express its ire over President Lee Teng's visit to the U.S. In retaliation, the U.S. had sent two powerful carrier groups to the region.

Unlike the ones in 1995 and 1996, the current live-fire drills occur nearer to the island, making escalation a real possibility. With such heavy forces, armed to the teeth, deployed so close to the Taiwanese coastline, at points less than 50 miles, the demonstration of force can, advertently or inadvertently, escalate into an open conflict.

Since the 1990s, a lot has changed in China. Under President Xi Jinping, China's military has gained strength and confidence. This summer, Chinese authorities vehemently denied that any part of the Taiwan Strait could be regarded as international waters, raising the possibility that they would take action to stop and block American warships from passing through one of the busiest commerce lanes in the world.

The island nation appears to have been caught in a time warp with its deliberately unclear diplomatic relationship with the U.S. since its fugitive leaders took refuge in their island fortress. The "One-China" policy that Washington upholds recognises but does not support Beijing's claim that Taiwan is a part of China, which is at the issue's root. The American 'strategic ambiguity' towards China's claim over its 'breakaway province' is deliberately designed to keep Beijing guessing its response in case of a military assault on Taiwan. This policy has enabled Taiwan to grow prosperously under the American security umbrella for over seven decades, but now with Chinese power growing comprehensively, the region is entering dangerous waters.

Ms Pelosi has a penchant for indulging in anti-Beijing posturing that makes for excellent optics back home. In 1992 she hoisted a banner at Beijing's Tiananmen Square to honour the pro-democracy victims, which attracted a lot of attention back home. Some critics may claim that provoking China may benefit Democrats in the upcoming congressional elections, not forgetting that she is also second in line for the presidency after Vice President Kamala Harris. 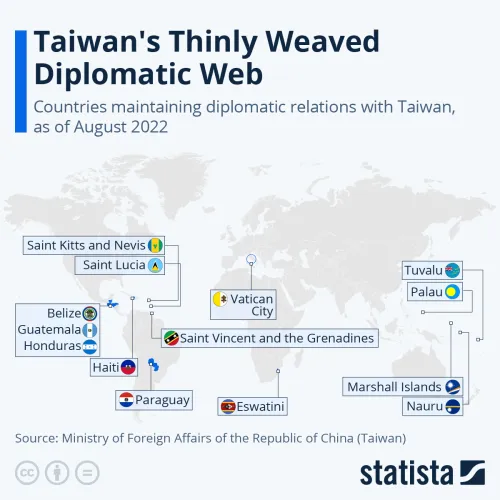 Pelosi's visit has garnered both appreciation and hatred in the international arena. Despite China's warnings, Pelosi's visit to Taiwan was provocative, so China's angry reaction was well expected. At this juncture, it is best to hope that China's four-day military exercises are a mere power demonstration act rather than any intention to invade Taiwan or an escalation.

In the global economy, Taiwan plays a pivotal role. It is a dominant international actor in the information and communications technology sector and a significant provider of goods across various industries. This strategic importance is reflected from both sides; China, which has increased its economic penalties against exports like sand, fish, and citrus fruits, has not ventured to interfere with Taiwan's semiconductor industry. Pelosi's meeting with the head of the world's largest chipmaker serves as a reminder that Taiwan is directly in the centre of the U.S.-China high-tech rivalry.

In a game of big powers faceoff, little Taiwan is no more than a pawn caught in the middle. Taking Ukraine as a template, it may be even doubtful if the U.S. can militarily prevent the PLA from swarming over "Chinese Taipei," whatever the military, economic or human cost.