The Kingdom of Bahrain announced that it had made its largest oil discovery since 1932. The newly discovered oil field contains up to 80 billion barrels of tight..

The Kingdom of Bahrain announced that it had made its largest oil discovery since 1932. The newly discovered oil field contains up to 80 billion barrels of tight (or shale) oil, dwarfing the country’s current reserves.

Bahrain is a small Arab Kingdom in the Persian Gulf. It is an island nation comprising of a small archipelago surrounding Bahrain Island, located between the Qatar peninsula and the north eastern coast of Saudi Arabia. Bahrain is Asia’s third-smallest nation in size, after the Maldives and Singapore.

Bahrain was one of the first countries to convert to Islam (AD 628). Following an era of Arab rule, it was occupied by the Portuguese in 1521. In 1783, Bahrain was under the rule of the Bani Utbah clan and has since been ruled by the Al Khalifa royal family, with Ahmed al Fateh as Bahrain's first hakim. Following several treaties with the British, in the latter half of the 1800s, Bahrain became a colony of the United Kingdom. In 1971, Bahrain attained independence and was declared a Kingdom in 2002.

The Bahraini currency is the second highest valued currency unit in the world. Of the countries in the Persian Gulf, it was the first post-oil economy. The country's banking and financial services sector, particularly Islamic banking, have benefited from the regional boom driven by demand for oil. Petroleum production is Bahrain's most exported product, accounting for 60% of export receipts, 70% of government revenues, and 11% of Gross Domestic Product.

An oil well is a drilling in the earth designed to bring petroleum oil hydrocarbons to the surface. The first oil well made in the Arabian side of the Persian Gulf is situated in Bahrain. The well is located below Jebel Dukhan, a mountainous region in the country. It was discovered and operated by Bahrain Petroleum Company (BAPCO), which was established in Canada by Standard Oil Company of California in 1929. 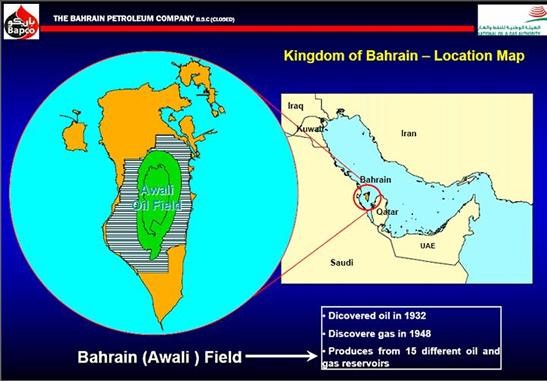 Bahrain’s latest discovery of oil reserves is said to be the largest ever in history. The discovery of 80 billion barrels of shale oil, equivalent to Russia’s entire reserve, pushes Bahrain to the top of the shale oil league.

Tight oil is found in water-resistant shale and limestone rock deposits. It is also commonly known as shale oil and is normally processed into gasoline, diesel, and jet fuel. However, unlike conventional oil, it is extracted using hydraulic fracturing, or fracking.

According to the Bahrain News Agency, the country’s oil and gas deposit off its west coast "is understood to dwarf Bahrain's current reserves." However, despite its modest output, Bahrain generates about 80% of its revenues from oil.

Bahrain, unlike its closest neighbors - Saudi Arabia and Qatar, is not a major oil producer and ranks 57th on the US Energy Information Administration's world list. Although the nation covers a smaller area than other oil-producing countries, it currently pumps around 45,000 barrels per day and more than 1 billion cubic feet (28 million cubic meters) of natural gas per day from a single onshore Bahrain Oil Field. It produces an additional 150,000 barrels per day from the offshore Abu Safa oilfield, which equals the production of Saudi Arabia.

Bahrain is the smallest producer of hydrocarbons in the Gulf Cooperation Council (GCC), which includes Kuwait, Oman, Qatar, Saudi Arabia, and the United Arab Emirates. Bahrain is the only GCC country that is not a member of OPEC.

Although it is currently uncertain as to when Bahrain will start production, government officials expect extraction from the oil field to begin within five years, according to Bahrain's national news agency.

Our assessment is that Bahrain’s latest oil discovery could turn the country into a major player in the global market. In recent years, the Bahraini government had responded to its relatively small reserves and falling oil prices by diversifying the economy into other sectors, such as financial services and tourism. Many recent studies suggest that exploiting new finds could be difficult and costly, considering the fact that a tight reservoir generally has a low recovery factor and only a fraction of the 80 billion barrels is likely to be recoverable. Nevertheless, we believe that this discovery breaks new ground for the Bahrain oil and gas industry in the long-term.