BAE Systems is a British multinational defense, security, and aerospace company. It is headquartered in London, United Kingdom and it has operations worldwide. It is among the world's largest defense companies and was ranked as the third-largest based on 2015 revenues. Its largest operations are in the United Kingdom and United States, where its subsidiary BAE Systems Inc. is one of the six largest suppliers to the US Department of Defense.

Other major markets include Australia, India, and Saudi Arabia, which account for about 20% of BAE's overall sales. It is the biggest manufacturer in Britain. The company was formed on November 30, 1999 by the £7.7 billion merger of two British companies: Marconi Electronic Systems (MES) – the defense electronics and naval shipbuilding subsidiary of the General Electric Company plc (GEC) – and British Aerospace (BAe) – an aircraft, munitions and naval systems manufacturer.

BAE Systems is involved in several major defense projects, including the Lockheed Martin F-35 Lightning II, the Eurofighter Typhoon, the Astute-class submarine, and the Queen Elizabeth-class aircraft carriers. BAE Systems is listed on the London Stock Exchange and is a constituent of the FTSE 100 Index.

As of December 2017, the Royal Australian Navy (RAN) fleet has 49 commissioned warships. RAN’s main strength is its 10 frigates and one destroyer of the surface combatant force: eight Anzac class frigates, two Adelaide class frigates, and one Hobart class destroyer. In addition to the commissioned warships, the RAN operates the sail training ship Young Endeavour and two Cape-class patrol boats acquired from the Australian Border Force. Other auxiliaries and small craft are not operated by the RAN, but by DMS Maritime, who are contracted to provide support services.

BAE Systems won a $35 billion (£20bn) contest to build nine anti-submarine frigates for Australia’s navy, as the country seeks to strengthen its navy against an Asian arms race and China. The Australian government announced that the design for the naval program will be based on BAE’s Type 26 Global Combat ship. The nine new ships will be built in Adelaide and will be known as the Hunter class.

Malcolm Turnbull’s government said the program would create 4,000 jobs across the country and create unparalleled local and global opportunities for large and small businesses. According to the Australian government, the Hunter class “will be one of the most capable warships in the world”. “The Hunter class will have the capability to conduct a variety of missions independently, or as part of a task group, with sufficient range and endurance to operate effectively throughout the region.”

British Prime Minister Theresa May and her ministers convinced the Australian government on the benefits of the UK’s design and engineering. BAE Systems beat off fierce competition from rival Spanish and Italian designs to win the deal. Australian government-owned ASC Shipbuilding will become a subsidiary of the UK defense giant for the duration of the contract.

The chief executive of BAE Systems, Charles Woodburn, said the selection of the company reinforced its position as a “leading designer and builder of complex maritime platforms”. “I am proud that our world-class anti-submarine warfare design and our approach to transferring technology and skills to the nations in which we work is expected to contribute to the development of an enduring world-class naval shipbuilding industry in Australia,” he said. 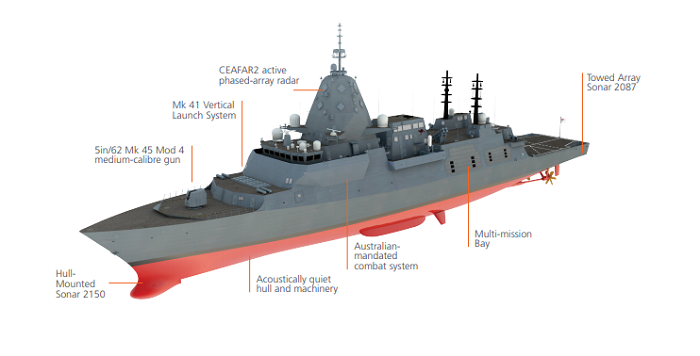 The deal was criticized by British union leaders. Gary Cook, Scottish chairman of the Confederation of Shipbuilding and Engineering Unions, said: “The inconvenient truth is that we’re not exporting ships, only manufacturing jobs that should be going to British shipbuilding communities.”

“Had the UK Government and BAE invested in the promised frigate factory at Scotstoun, those frigates could easily be built here. Instead, there is a rubble pile where that factory should be while 4,000 jobs and significant prosperity will be enjoyed in Australia and not the UK.”

British union leaders believe that the government’s failure to invest in factories means that shipbuilding communities in the UK would not benefit from this deal.

Our assessment is that the export of a British design for the frigates would be a massive boost for the UK economy. We believe this deal acts as an example of opportunities that would open up for Britain after Brexit. The scale and nature of this contract puts the UK at the forefront of maritime design and engineering and demonstrates the abilities of UK’s industry and government working together.