The first set of major elections held since the 2016 Presidential election in the US ended with the Democrats jubilant. Democrats Ralph Northam and Phil Murphy both won big gubernatorial races in Virginia and New Jersey respectively. There were also a series of upsets in the Virginia’s House of Delegates races with the Democrats emerging victorious.

The United States Presidential Election was held on November 8th, 2016. At the time, Democratic nominee, Hillary Clinton was the odds-on favorite to win. Experts did not think her opponent Donald Trump had much of a chance for victory. Trump was a polarizing nominee for the Republican party with many within the party criticizing him for alleged racism, sexism and bigotry. However, in a surprise victory, the Republican ticket of businessman Donald Trump and Indiana Governor Mike Pence ended up defeating Hillary Clinton. Trump took office as the 45th President, and Pence as the 48th Vice President, on January 20, 2017. On November 8th, 2016, there were a number of other elections including Senate, House and many gubernatorial and state and local elections. Once again, surprising pollsters and experts, Republicans won many of these seats – even ones that were expected wins for Democrats. This has been called as one of the greatest electoral upsets in the nation’s history. 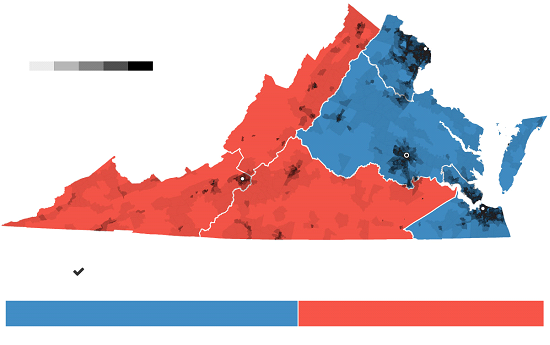 US President Donald Trump is a polarizing figure in domestic politics. He has been criticized by fellow Republican lawmakers like John McCain and Jeff Flake. His populist rhetoric has also been harshly criticized. Trump had endorsed Ed Gillespie for the Virginia gubernatorial race. Gillespie, who was the 61st Chair of the Republican National Committee, ran a negative campaign similar to the one that Trump himself ran on in 2016. Polls stated that the outcome was too close to call in advance.

In the end, Virginia Democratic Lt. Gov. Ralph Northam won the race defeating Gillespie and dealing a blow to the GOP nationwide. "We live in a very diverse society -- it is getting more diverse every day. It is that diverse society that makes this country great," Northam said in his victory speech. "And as long as I'm governor, I will make sure that we're inclusive, that we welcome people to the Commonwealth of Virginia. Our lights will be on. Our doors will be open."

Turnout for the elections was the highest in 20 years for a gubernatorial race, five percentage points and 10 percentage points higher than the last two. And voters in the urban and rural regions of the state broke more heavily along party lines than they had in the prior elections. Virginia is considered a crucial swing state and has elected both Democratic and Republican members in the past.

There were also a series of upsets in the Virginia’s House of Delegates races with the Democrats emerging victorious. Analysts have stated that the Democratic landslide in Virginia had less to do with changing demographics and more to do with people’s response to Trump and negative campaigning based on racism and division.

Despite the fact, analysts said that Gillespie ran a very “Trump-like” campaign, Trump himself disagreed. The President took to twitter and complained that the Republican candidate had not done enough to embrace Trump. He said, “Ed Gillespie worked hard but did not embrace me or what I stand for. Don’t forget, Republicans won 4 out of 4 House seats, and with the economy doing record numbers, we will continue to win, even bigger than before!”

The 2018 United States midterm elections will take place in the middle of Trump's term. All 435 seats in the United States House of Representatives and 33 of the 100 seats in the United States Senate will be contested. In addition, 39 state and territorial governorships and numerous other state and local elections will also be contested. Analysts have stated that incredible response on Tuesday, especially in Virginia could be a signal to how the 2018 elections may ultimately play out.

Our assessment is that elections on Tuesday could be indicative that people are reacting to Trump’s rhetoric and his policies and voting to send a signal. It is too early to predict how the 2018 elections will unfold, however, if the Democrats end up with a majority, then it could result in dire consequences for the Trump Presidency.