The Armenian parliament has rejected opposition leader Nikol Pashinyan’s bid to serve as interim Prime Minister. Pashinyan, who led the peaceful protests that resulted in the resignation of Prime Minister Serzh Sargsyan, has been accused of anti-Russian sentiment by the ruling party.

The former Soviet state of Armenia has strong economic and security ties to Russia.

Armenia is a landlocked country in the South Caucasus region between Europe and Asia. It is bordered by Turkey in the west, Georgia in the north, and Azerbaijan in the south and east. Armenia was one of the first Christian civilizations, with some of its churches dating back to the fourth century. It has been a part of the Roman, Arab, Byzantine, Persian, Mongolian, and Ottoman empires.

When the Ottoman Empire was defeated in World War I, Armenia emerged as an independent nation. However, soon after, in 1922, it was incorporated into the Soviet Union (USSR). Armenia ceded from the Soviet Union in 1991 with a 94% referendum and maintained substantial economic and political ties to the region. Armenia has been one of Russia’s closest allies, and the two nations have maintained positive relations since the end of the Soviet era. Additionally, Russia and Armenia have strong economic and security ties. Armenia remains reliant on Russia for its energy supply, and Russia is its largest trading partner. Armenia has adversarial relations with its other neighbours.

Serzh Sargsyan was first elected as President in 2008. He won a second term in 2013 and is known to be a close ally of Russian President Vladimir Putin. In 2015, a public referendum backed the constitutional changes, reducing the powers of the President in favour of the premiership. Armenia moved from a presidential to a parliamentary system. The opposition claimed that the move allowed Sargsyan to remain in power, and Sargsyan vowed “not to seek any high office if the constitutional change passed". However, he was voted into office as Prime Minister in April 2018.

Sargsyan was forced to resign by the end of the month, after wide-spread protests demanding his resignation broke out. "The street movement is against my office. I will fulfil your claim," Sargsyan said in a statement announcing his resignation. He added, "Nikol Pashinyan was right. I was wrong." 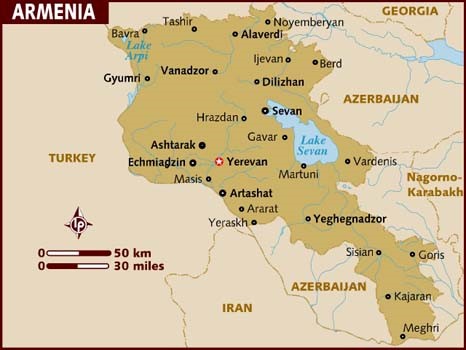 Despite Prime Minster Serzh Sargsyan’s resignation, protests continued as demonstrators called for opposition leader Nikol Pashinyan to be the next Prime Minister. Pashinyan is one of the leaders of the “Velvet Revolution”, the peaceful protests that brought about Sargsyan’s exit. Pashinyan has called for his supporters to continue protests, block roads, railways stations, and airports. Pashinyan is a former newspaper editor, known for his strong anti-corruption stance. In 2011, he was jailed for leading protests that had turned violent and left 10 people dead. He was elected to Parliament in 2012.

The dominant ruling party, the Republican Party, refused to nominate a different candidate following Sargsyan’s exit. It also blocked Pashinyan’s bid to become interim Prime Minister, a move which effectively prolonged the crisis, according to some analysts. Pashinyan lost the majority vote required to stand in as Prime Minister by a small margin earlier this week. The second vote to find a new head of state is due on May 8th. If the parliament fails to select a replacement by this date, it will be dissolved.

Republican Party members accused Pashinyan of supporting “anti-Russian activism,” and having links to anti-Russian leaders in other countries. However, Pashinyan has promised to improve relations with Russia. He has promised that Armenia would remain a member of the Russia-led Eurasian Economic Union and Collective Security Treaty Organization. Ahead of the vote, Pashinian warned lawmakers, "the Republican Party's attempts at thwarting this ballot will start a political tsunami."

The Kremlin reaction to the proceedings was relatively muted. Russian officials noted that this was a domestic affair. President Putin reportedly spoke with Armenian President, Armen Sarkissian emphasising the need for "restraint & responsibility". Russia has previously blamed the West for uprisings in Ukraine (Orange Revolution) and Georgia (Rose Revolution). Armenia saw wide-spread protests in 2015 over rising fuel costs. At the time, Foreign Minister Sergei Lavrov said, “You know how the color revolutions, and the Maidan in Ukraine started.” Russia claims that the CIA played a role in starting anti-Russian protests. However, as the editor of the journal Russia in Global Affairs Fyodor Lukyanov noted, this is “not a colour revolution.” "Everybody understands that the roots of this crisis in Armenia are domestic - unlike several previous cases in the post-Soviet space, where international presence was pretty clear," Lukyanov noted.

Our assessment is that Serzh Sargsyan’s resignation was a result of widespread civic engagement, and can be considered a win for Armenian civil society. However, as stated previously, we believe that even with a different leadership, Armenia’s foreign policy may not see much change. Nikol Pashinyan has placed greater emphasis on domestic political reform than geopolitical strategy. As long as Moscow is secure in Armenia’s loyalty to Russia, it may be unlikely to drastically interfere in Armenia’s domestic politics.