Armenia began voting in an early parliamentary election as Acting Prime Minister Nikol Pashinyan sought a stronger mandate. He was elected by lawmakers in May after a peaceful revolution earlier this year. Armenia is a country in the South Caucasus region of Eurasia. It is a unitary...

He was elected by lawmakers in May after a peaceful revolution earlier this year.

Armenia is a country in the South Caucasus region of Eurasia. It is a unitary, multi-party, democratic nation-state with an ancient cultural heritage.

According to the current Constitution of Armenia, the President is the head of state holding largely representational functions, while the Prime Minister is the head of government and exercises executive power. Legislative power is vested in the unicameral parliament is also called the Azgayin Zhoghov or National Assembly. Armenia has universal suffrage above the age of eighteen.

The Nagorno-Karabakh conflict is a territorial and ethnic conflict between Armenia and Azerbaijan over the disputed region of Nagorno-Karabakh and seven surrounding districts, which are de facto controlled by the self-declared Republic of Artsakh but are internationally recognized as de jure part of Azerbaijan. The present conflict began in 1988 when the Karabakh Armenians demanded that Karabakh be transferred from Soviet Azerbaijan to Soviet Armenia. The conflict escalated into a full-scale war in the early 1990s.

The 2018 Armenian revolution was a series of anti-government protests in Armenia from April to May 2018 staged by various political and civil groups led by a member of parliament Nikol Pashinyan (head of the Civil Contract party). 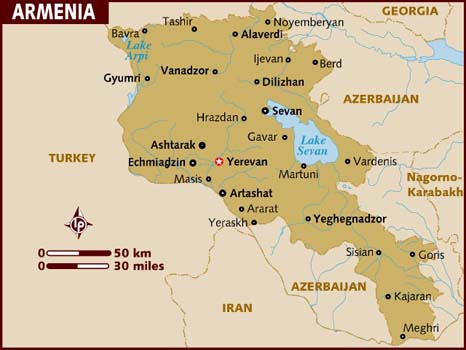 Nikol Pashinyan came to power after weeks of mass protests in April against corruption and cronyism in the former Soviet republic. Mr. Pashinyan represents a drastic break from the cadre of rulers who have run Armenia since the late 1990s.

He stepped down in October so that Parliament could be dissolved in readiness for the early election. Former high-ranking officials were dismissed, and some were arrested following the power change. On Friday, a court of appeal ordered the detention of former President Robert Kocharyan on charges of attempting to overthrow the constitutional order. He was first arrested in July but freed the following month, and the case was sent to the appeals court. Mr. Kocharyan was Armenia’s second president, serving from 1998 to 2008.

The former ruling Republican Party, however, still dominates the current Parliament that was elected in 2017. Mr. Pashinyan has said he expected the vote to lead to a legislature that better reflects the nation’s new political landscape.

Nine parties and two blocs are taking part in the election, and opinion polls suggested that the My Step Alliance, which includes Mr Pashinyan’s Civil Contract Party, would easily win a parliamentary majority.

After taking office, Mr. Pashinyan promised there would be no major shifts in Armenian foreign policy and offered assurances he would not break with Moscow. Armenia hosts a Russian military base and is a member of the Russia-led military and economic alliances. He also suggested that he would stick with existing policies on the long-running issue of Nagorno-Karabakh. A mountainous part of Azerbaijan, Nagorno-Karabakh is run by ethnic Armenians who declared independence from Baku during a conflict that broke out as the Soviet Union crumbled in 1991. Though a cease-fire was reached in 1994, Azerbaijan and Armenia still regularly accuse each other of conducting attacks around Nagorno-Karabakh.

Armenia could be in the middle of a populist grip as Nikol Pashinyan was elected unopposed in the May 2018 elections. Unless there is a robust civil society presence in Armenian politics, it is probable that the new elections will result in a largely populist government with minimal opposition. The official stance of Mr. Pashinyan on the Nagarno-Karabakh conflict resonates with the public. This may lead to a more aggressive approach to the fragile cooperation efforts with Azerbaijan.

Our assessment is that this election will define Armenia’s democracy in the age of nationalist movements. We believe that the 2018 Revolution has resulted in a measurable change in Armenia’s political system and we also feel that this change must be used for the greater good of the country.