Buenos Aires’s bond market is in a downward spiral as debt mounts and the peso continues to underperform. President Macri proposed to reduce a few of his ministries as a new, harder austerity drive is about to begin. Argentina is the eight largest country in the world and covers most of the southern..

Buenos Aires’s bond market is in a downward spiral as debt mounts and the peso continues to underperform.

President Macri proposed to reduce a few of his ministries as a new, harder austerity drive is about to begin.

Argentina is the eight largest country in the world and covers most of the southern portion of South America. Following three centuries of Spanish colonization, it declared independence in 1816. The 1970s ushered in a period of military dictatorship and repression during which thousands of presumed dissidents ‘disappeared’ or were murdered. Defeat by the British in the Falklands Islands War of 1982 led to the fall of the military regime and the re-establishment of democratic rule, which has endured despite various economic hardship.

In 2013, the country was censured by the IMF over the inflation and economic growth data published by the administration of President Christina Fernandez de Kichner. It was a step that finally led to Argentina’s expulsion from IMF.

Elected in 2015, President Mauricio Macri took steps to liberalize the Argentine economy by lifting capital controls, floating the peso, removing export controls on some commodities, and cutting energy subsidies. In 2017, the Argentinian economy grew at 2.5%, and public debt was approximately 54% of GDP. 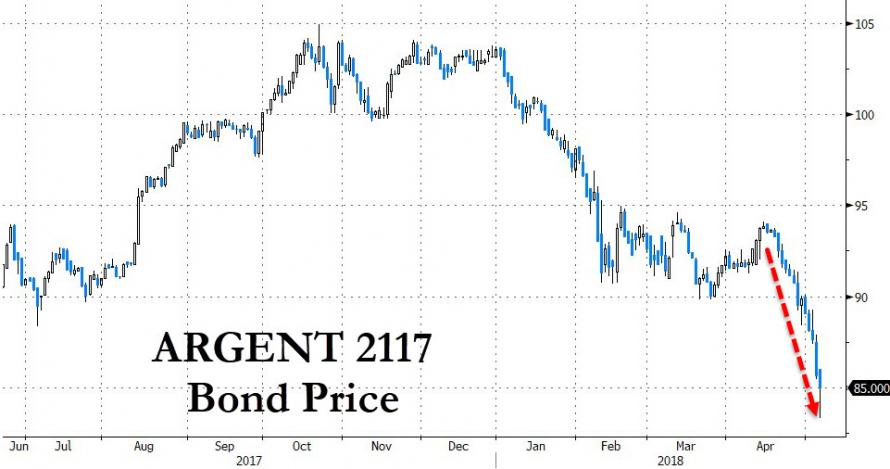 Read more about our analysis of Argentina’s IMF bailout package agreement and appeal for more funds here and here.

Argentina, which increased interest rates last week by 15 percentage points to 60%, emerged as one of the rising stars amongst emerging markets two years ago after the centre-right reformist Mauricio Macri came to power.

However, with the currency losing more than half its value this year, fund managers are cautious about additional exposure. Standard & Poor’s on Friday warned that it could downgrade Argentina’s credit rating further, following fears that the peso’s nosedive could jeopardise the government’s economic programme. Argentina’s underperforming bond market is largely attributed to the free-falling value of the peso. The Argentine national currency has suffered both from the ongoing trade war and uncontrolled public debt which has piled over the last decade.

The peso has weakened by about 24% against the dollar since the start of the month — and more than 45% this year — once again cementing its position as the biggest loser in the broader Emerging Markets rout triggered by the Turkish lira’s tumble.

Buenos Aires’s troubles are compounded by an existing austerity drive which is forcing President Macri to appeal for more funds from the IMF’s bailout package. According to government sources, Macri will be requesting US$30 billion from the IMF at below market interest rates. The depreciating value of the peso has been a heavy drain on central bank reserves in the last few months.

“Going to the IMF at 4% is saving about half on the interest rate,” stated Elisa Carrió, head of the Civic Coalition party which is part of Macri’s governing coalition. “This will allow us to be covered until 2019.”

Last month, the IMF reduced its growth forecasts for Argentina during 2018 from 2.5% to 2%. The government also seems unlikely to meet its projected inflation rate of only 15% for 2018, with the IMF predicting 19.2% instead.

Our assessment is that Argentina is presently facing trouble on several fronts with the financial markets having lost their appetite for “Argentine” risk. We believe that the concern over the governments management of the economy grew in December after it pushed the central bank to ease this year’s inflation target from 12% to 15%. We feel that investors may have panicked at the country’s wide fiscal and current account deficits, its 25% inflation, and its rapidly expanding pile of foreign debt.