Apple and its tax problem

The leaked documents that have been named Paradise Papers have revealed the secretive new structure that allowed Apple to avoid paying billions in taxes. Apple Inc. is one of the..

The leaked documents that have been named Paradise Papers have revealed the secretive new structure that allowed Apple to avoid paying billions in taxes.

Analysts said Apple was now closer to becoming the first trillion dollar company, as shares have risen in 2017. The company is seeing robust sales and quarterly profits are on the rise. As of the most valuable companies, Apple is the largest taxpayer in the world. It has paid over $35 billion in corporate income taxes in the last three years. Apple pays taxes in every country where its products are sold. 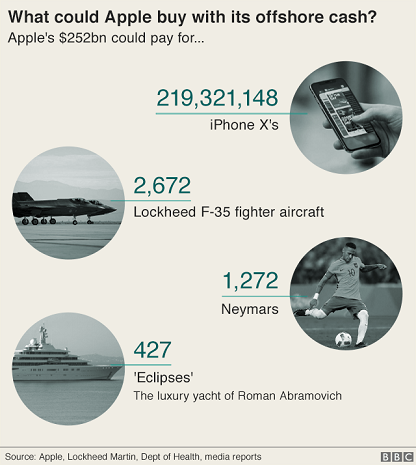 A huge leak of documents called the Paradise Papers are depicting how the rich across the world including UK’s Queen Elizabeth and Canadian Prime Minister Justin Trudeau use offshore tax havens to make massive investments. The leak contains 13.4m documents, mostly from one leading firm in offshore finance called Appleby. The International Consortium of Investigative Journalists (ICIJ) through its wide network of journalists is publishing stories based on the leak.

The leaked documents have revealed the secretive new structure that allowed Apple to avoid paying billions in taxes. The papers showed that Apple chose the Channel Islands after a 2013 crackdown on its controversial tax practices in the Republic of Ireland. Up until 2014, Apple had been using a loophole called “double Irish” to exploit takes in the US and Republic of Ireland. The company only paid 5% of its foreign profits in taxes instead of 12.5% that is required under Irish corporation tax and 35% required by the US government. To keep its tax rates low, Apple looked for an offshore financial centre that would serve as the tax residency for its Irish subsidiaries. Specifically, Apple Operations International (AOI), which held $252bn overseas cash hoard and Apple Sales International (ASI) were the two key Irish subsidiaries. They were managed in Jersey from the start of 2015 until early 2016. In August 2016, after a three-year investigation, the European Commission finds that Ireland gave an illegal tax benefit to Apple.

Apple has since responded that the new structure had not lowered its taxes. A statement from the company notes, ““The debate over Apple’s taxes is not about how much we owe but where we owe it. As the largest taxpayer in the world we’ve paid over $35 billion in corporate income taxes over the past three years, plus billions of dollars more in property tax, payroll tax, sales tax and VAT. We believe every company has a responsibility to pay the taxes they owe and we’re proud of the economic contributions we make to the countries and communities where we do business.” The company also added, “When Ireland changed its tax laws in 2015, Apple made changes to its corporate structure to comply. Since then, all of Apple’s Irish operations have been conducted through Irish resident companies. Apple pays tax at Ireland’s statutory 12.5 percent. As part of these changes, Apple’s subsidiary which holds overseas cash became resident in the UK Crown dependency of Jersey, specifically to ensure that tax obligations and payments to the US were not reduced.”

However, leaked emails make it clear that Apple wanted to keep this secret. One email sent between senior partners at Appleby says, "For those of you who are not aware, Apple [officials] are extremely sensitive concerning publicity. They also expect the work that is being done for them only to be discussed amongst personnel who need to know.”

Our assessment is that the leaked documents have depicted how the rich and the powerful have exploited legal loopholes to avoid paying billions of dollars in taxes. Apple’s connection to Paradise Papers signals that the biggest and most valuable companies in the world may be held accountable for their actions. It is possible that this could prompt more transparency in the process.