Another investment in automation

Toyota Motor Corp has announced its plan to invest over $ 2.8 billion in research for self-driving vehicles. The company is the latest in a series of deals..

Toyota Motor Corp has announced its plan to invest over $ 2.8 billion in research for self-driving vehicles. The company is the latest in a series of deals involving automated vehicles announced this year.

However, research regarding self-driving cars has a long way to go before the vehicles can be available for widespread commercial use.

Experiments on self-driving autonomous cars have been conducted since the 1920s. However, it is only recently that they have been considered a viable option for transportation.

Since the 2010s, major car manufacturers including General Motors, Ford, Mercedes Benz, Volkswagen, Audi, Nissan, Toyota, BMW, and Volvo have been testing self-driving cars on the roads. In 2012, the Google driverless car project announced that its test fleet had completed 480,000 km with no accidents. In 2016, companies with investments in the industry started the Self Driving Car Coalition. Members of this coalition include Alphabet Inc's Google unit Waymo, Ford Motor, Volvo, and Uber. The coalition’s goal is to push for federal action from the government to get self-driving cars to the market.

According to experts, autonomous cars must address three issues: perception, prediction, and driving policy. The car’s perception relies on a number of sensors, including cameras, radars, and LIDAR, which manipulates light pulses to create a 3D map. The sensors enable the cars to interact with the environment to identify obstacles. Following this, the car must predict what will happen next in order to respond appropriately (according to driving policy). Identification and prediction pose the greatest challenge to developers. Changing environments, the unpredictability of human drivers, varying cultural driving conventions, and weather conditions all impact identification and prediction.

According to the widely-accepted scale established by the Society of Automotive Engineers (SAE), there are five levels of automation. Levels 1 and 2 are already available in a number of cars in the market. Level 3 is “Highly Automated Driving”. Most companies working on automation are aiming for level 4 or “Fully Automated Driving”, where vehicles are entirely driverless in certain environments. Level 5 is “Full Automation”.

Autonomous cars come with a number of security threats, including cyber-attacks and the potential for the vehicles to be used as weapons. Industry expert Qi Lu stated, “You have an object that is capable of moving by itself. By definition, it is a weapon.” Autonomous vehicles are dependant entirely on advanced computer systems, which have the potential to be remotely hacked. 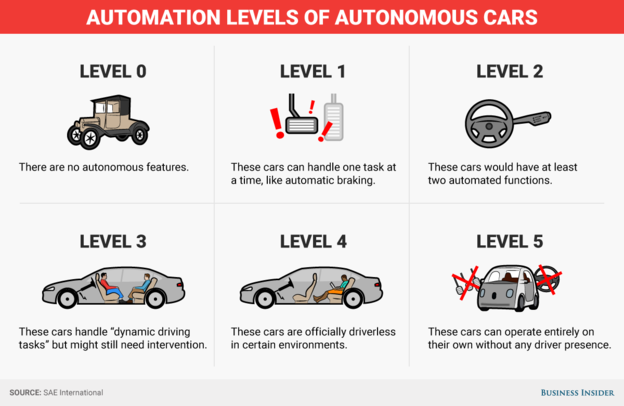 In a recent announcement, Toyota Motor Corp stated that it would invest $ 2.8 billion in R&D for autonomous driving.

The new venture, Toyota Research Institute-Advanced Development, will be based in Tokyo and will focus on developing self-driving software. It will reportedly provide 1000 new jobs. Toyota will hold a 90% share in the venture while collaborating with Denso Corp and Aisin Seiki Co, who will each hold a 5% share.

James Kuffner, Chief Technology Officer at Toyota Research Institute, will be leading the project. “This company’s mission is to accelerate software development in a more effective and disruptive way, by augmenting the Toyota Group’s capability through the hiring of world-class software engineers,” Kuffner said in a statement.

The car manufacturer has invested $1 billion in AI and AI-related technology, and has made deals with Microsoft Corp and Uber Technologies.

Toyota is the latest in a series of deals related to autonomous vehicles this year. In January, the Volkswagen Group and Hyundai announced a deal with Aurora Innovation, and stated that they would launch self-driving cars by 2021. Aurora is a start-up that manufactures self-driving technology. The tech company recently raised $90 million in funding for its research.

Jang Woong-jun, head of Advanced Driver Assistance Systems at Hyundai said, "Solving [the challenges associated with] self-driving technology is going to bring many benefits to society -- not just for convenience, but safety.... I don't think there's one company that can develop everything on their own."

In 2017, Intel predicted that the market for self-driving cars would be over $7 trillion by 2050.

Our assessment is that race towards self-driving technology is becoming more competitive. Google’s Waymo and Uber recently reached a settlement in a related trade secrets lawsuit. Companies are betting on the future of automation. As stated previously, we believe that there are a number of issues that must be addressed before these cars are available commercially. The development of reliable safety systems that address security threats must be first on the list.