Only a few months earlier, the two nations resolved a military stand-off in the Doklam plateau.

India’s contemporary relationship with China began in 1950. Between 1962 and 1987, India and China have been involved in three major military conflicts. A bilateral relationship has since been established but both nations have often been pitted against one another as they are two of the fastest growing economies in the world. The two countries have never completely resolved their border problems and Chinese troops have reportedly infringed upon the Indian Territory over the years. The cause of 1962 war was a dispute over the sovereignty of the widely separated Aksai Chin and Arunachal Pradesh border regions.

In June 2017, a skirmish broke out between Indian and Chinese troops at the Doklam plateau. Indian soldiers had intervened the construction work being conducted by China in the region. The area is a disputed territory between Bhutan (an Indian ally) and China. Following the fights, both sides have increased their military presence in the region. India argued that China’s actions in Doklam posed a security threat for the nation. The stand-off continued for months until the end of August 2017 when it was called off. The Indian government withdrew its troops and China withdrew its road construction equipment and bulldozers.

At the time China’s Senior Colonel Wu Qian of the PLA and Defence Ministry said, “The Chinese military will remain vigilant and firmly defend its national territory and sovereignty following a military stand-off between China and India. Peace and stability along the China-India border concerns regional peace and stability and accords with the common interests of people on both sides of the border."

Nirmala Sitharaman is an Indian politician who was appointed the Defence Minister of India in September 2017. She is the second woman to serve in this role in Indian history. 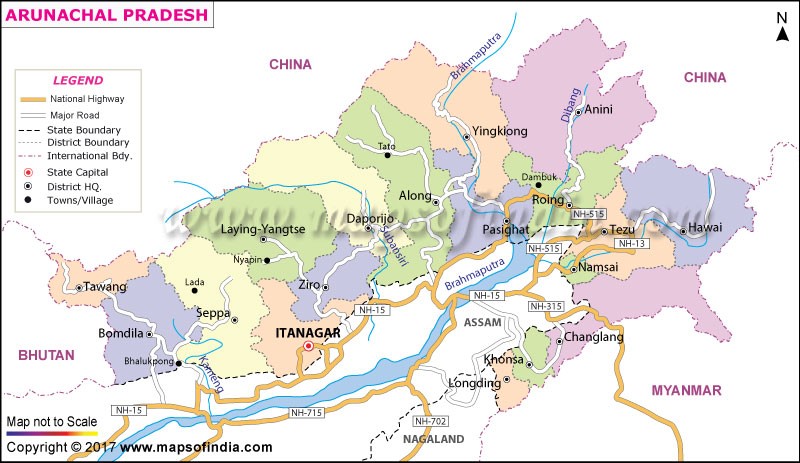 In November 2017, Sitharaman made her first visit to Arunachal Pradesh. She visited the forward Army posts in Arunachal Pradesh and Air Force base in Eastern Assam. During her visit, she was briefed on the defence preparedness along the Line of Actual Control. During the visit she took stock of the operational preparedness and infrastructure development of the base. She also interacted with soldiers in the region.

Prior to visiting the LoAC, she spoke about Arunachal Pradesh noting, “We (the Centre) are with the people of Arunachal Pradesh. I stand here first as a citizen of the nation and secondly as the defence minister.”

China officially registered their concerns about Sitharaman’s visit to Arunachal Pradesh. “An Indian official going to a disputed region on the China- India border will perhaps make the issue even more complex, and is not beneficial to efforts by both parties to maintain peace and tranquility on the border,” Chinese Foreign Ministry spokeswoman Hua Chunying said.

China hoped India could meet it half-way to resolve their differences, Hua said. “We hope India can work with China to continue to use talks to appropriately resolve the border issue via negotiation and create good conditions and atmosphere,” she added.

India’s foreign ministry did not immediately respond to a request for comment. India, in the past, has often defended it right to protect its sovereignty whenever China complained about Arunachal Pradesh and cited border problems. The country has also expressed its disquiet over India’s decision to host Tibetan spiritual leader Dalai Lama in the region.

Our assessment is that China has always been deeply sensitive about the LoAC in Arunachal Pradesh as it states it threatens its sovereignty. The nation is more cautious about India’s movement in the border post the Doklam plateau which witnessed a significant deterioration in the bilateral ties between China and India.