For the first time ever, Amazon has surpassed Alphabet in market value and has become the second most valuable listed company in the world. Amazon is an American..

For the first time ever, Amazon has surpassed Alphabet in market value and has become the second most valuable listed company in the world.

Amazon is an American electronic commerce and cloud computing company that was founded on July 5, 1994. It started as an online bookstore and later diversified to sell various commodities like electrical appliances and apparel. Today, it also produces consumer electronics like the Kindle e-Readers, tablets and more. It’s market value had exceeded $500 billion by July 2017.

Amazon posted earnings for the second quarter of 2017 that fell dramatically short of investor expectations, even as the ecommerce giant boosted revenue 25%. Net sales roles to $38.0 billion in the second quarter. The tech giant reported $43.7 billion in earnings in 2017. This beat market expectations considerably as investors projected earnings of $42.1 billion. The Amazon sales leaped by 34 percent over the previous quarter.

Despite Amazon's sales growth, the firm's profits were nearly flat in 2017. This is because as it ploughed money into tech gadgets, streaming video, data centres and warehouses to support its growing empire. The firm said profits in the three months to the end of September were $256m, up from $252m in 2016. Chief executive Jeff Bezos said the Amazon sales increase was in part down to the growing demand for the firm's smart home products. He said, “In the last month alone, we've launched five new Alexa-enabled devices, introduced Alexa in India, announced integration with BMW, surpassed 25,000 skills, integrated Alexa with Sonos speakers, taught Alexa to distinguish between two voices, and more.”

Jeffrey Preston Bezos is the founder, chairman, and chief executive officer of Amazon.com. On January 8th 2018, Bezos net worth reached $105.1 billion, making him the richest man in the world.

Amazon has a history of expanding its businesses and disrupting industries. To know more, click here.

Google LLC is an American multinational technology company that was founded in 1998 by Larry Page and Sergey Brin while they were Ph.D. students at Stanford University, in California. It specializes in Internet-related services and products. These include online advertising technologies, search, cloud computing, software, and hardware. In August 2015, Google announced plans to reorganize its various interests as a conglomerate called Alphabet Inc.

Alphabet declared that it made $3.5 billion in net income and saw sales of $26 billion in the second quarter of 2017. In June 2017, the European Union antitrust regulators slapped Alphabet with a record $2.7 billion fine. The verdict was for the first of three investigations currently being conducted on the search giant. The European regulator accused the company of using its dominance in the industry for pushing its own advertising business. Google, the EC has noted, uses its considerable clout to promote its own services at the cost of other businesses. 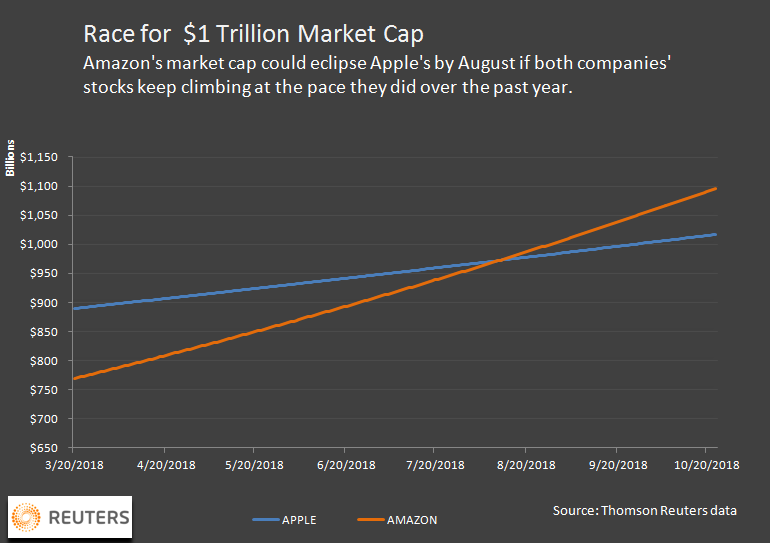 In February 2018, Alphabet Inc revealed that it had missed its quarterly profit forecasts. This was because despite steady ad sales growth, the company increased its spending to promote its consumer gadgets, YouTube video app and cloud computing services.

On March 2018, for the first time ever, Amazon surpassed Google to become the second most valuable listed company in the world. The market capitalization for Amazon rose to $768 billion after shares finished up 2.69 percent at $1,586.51. In the meantime, Alphabet lost 0.39 percent. It’s market value was at $762 billion. The shares fell in part due to concerns regarding security breach on Facebook by Cambridge Analytica. Wall Street was likely concerned about the regulatory fallout from the revelation.

The online advertising market is dominated by Facebook and Google and both companies have come under criticism on how they take advantage of user data at their disposal. These fears caused the market value to drop. Experts state that if the trajectory keeps up then Amazon’s value would surpass 1 trillion dollars by August of this year. Apple remains the most valuable company with a market value of $889 billion.

Our assessment is that if Amazon’s shares continue to rise, then it could surpass Apple’s value by the end of 2018. This is largely because the company continues to invest in computing, groceries and other new businesses, thus bolstering investor confidence. In the meantime, Facebook and Google will struggle as people have begun losing confidence in how these companies employ their user data. As Amazon also is a custodian of Big Data, will confidence in the brand also be affected in the future?