The Leader of the ISIL urges fighters to keep up the fight despite being severely depleted. The Islamic State of Iraq and the Levant also known as ISIL and ISIS that is considered a Salafi jihadist militant group and unrecognized proto-state that follows a fundamentalist, Wahhabi doctrine of Sunni Islam. It gained global prominence...

The leader of the ISIL urges fighters to keep up the fight, despite forces being severely depleted.

The Islamic State of Iraq and the Levant also known as ISIL and ISIS that is considered a Salafi jihadist militant group and unrecognized proto-state that follows a fundamentalist, Wahabi doctrine of Sunni Islam. It gained global prominence in early 2014 when it drove Iraqi government forces out of key cities in its Western Iraq offensive, followed by its capture of Mosul and the Sinjar massacre.

This group has been designated as a terrorist organization by the United Nations and many individual countries. ISIL is widely known for its videos of beheadings of both soldiers and civilians, including journalists and aid workers, and its destruction of cultural heritage sites. The United Nations holds ISIL responsible for human rights abuses and war crimes and Amnesty International has charged the group with ethnic cleansing on a "historic scale" in northern Iraq.

In October 2016, the Iraqi army launched one of its most aggressive offensives against ISIS by besieging areas controlled by ISIS in regions surrounding Mosul. This offensive was called Operation We Are Coming, Nineveh. By the 1st November, the forces entered the city of Mosul and began one of the biggest offenses against the militant group. By February 2017, the Iraqi army had recaptured western Mosul. Iran is an opponent of the Islamic State of Iraq and the Levant (ISIL), fighting the group in Syria and Iraq. Iran's Quds Force is a "key player" in military intervention against the ISIL. ISIS no longer fully controls a major town or city - following years of U.S.-led coalition and Russian airstrikes. 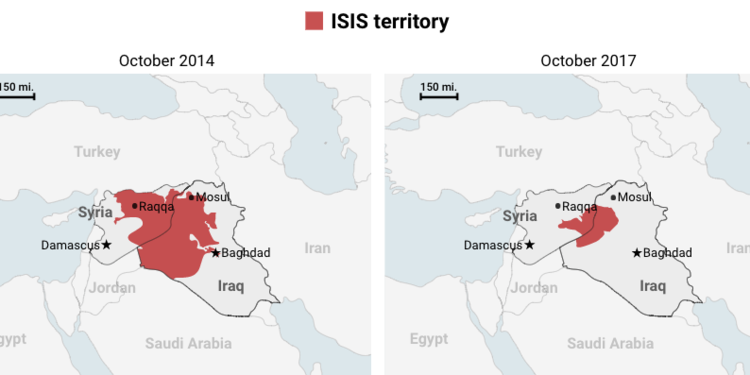 Read more about our extensive analysis on the rise and fall of ISIL in Syria and Iraq here, here and here.

The Islamic State leader Abu Bakr al-Baghdadi resurfaced on Tuesday to deliver a message marking the Muslim Eid al-Adha holiday in which he urged his followers to keep up the fight and to wage lone-wolf attacks in the West.

References in the audiotaped speech to recent developments in the Syrian war and to the spat between Turkey and the United States over a detained American pastor suggest that he was alive at least until very recently, despite a new spate of rumors earlier this month that he had died of injuries suffered in airstrikes. There was no immediate confirmation that the voice delivering the 54-minute address was Baghdadi’s.

However, the holiday speech is in keeping with the periodic outreaches by the self-proclaimed “caliph” of the vast territories once controlled by the Islamic State. His last message was on Sept. 28 last year, and this one was similar in its tone, language, and exhortations.

A second Islamic State-controlled area exists nearby in the remote desert of eastern Syria that is surrounded by Syrian government forces, backed by their Russian and Iranian allies. Yet, although it now seems likely that the so-called caliphate will soon be entirely vanquished, there are also signs that the Islamic State is succeeding in reinventing itself as a guerrilla insurgency. An escalation of small-scale attacks in Iraq in recent weeks has raised concerns that the group may survive beyond its eventual territorial defeat.

Two recent reports by the United Nations and the U.S. government suggest there may still be 30,000 Islamic State fighters or supporters in Iraq and Syria. Much of Baghdadi’s speech was focused on descriptions of the decline of American influence around the world, for which he claimed credit on behalf of the Islamic State, and its war of attrition against the United States.

The return of Al-Baghdadi, even if it is on tape, represents a psychological boost for a depleted fighting force. It represents a blow to the security forces battling ISIL fighters, as he was confirmed to be killed in action during one of the air strikes in 2016.

Our assessment is that ISIL is down, but not out. The jihadists may be losing their territorial bases, but their ideology has not been vanquished. The group might continue to propagate its hateful ideas through social media. We also believe that ISIL will revert to guerrilla warfare to disturb the security forces in Iraq and Syria, as it no longer has the resources to sustain a conventional fighting force.