Ethiopia’s Prime Minister Abiy Ahmed is a young, democratic leader who is preaching peace and he's the leader the country has been waiting for. Ethiopia is a landlocked nation in eastern Africa, with a population of over 100 million: the second highest in Africa. Over 70% of the population is dependent on agriculture for livelihood...

Ethiopia’s Prime Minister Abiy Ahmed is a young, democratic leader who is preaching peace and he's the leader the country has been waiting for.

Ethiopia avoided colonial rule until the 20th century when it was invaded by fascist Italy in 1935. The occupation lasted 6 years. A revolt returned the former Emperor Selassie to power only to be overthrown by Soviet-backed dissidents in 1974.

In 1991, the Tigrayan People's Liberation Front (TPLF) toppled the dictatorship of Mengistu Haile Mariam, whose communist regime had imposed military rule since 1974. Mengistu had thousands of his political opponents murdered and ignored a famine that killed one million people -- a tragedy that found a global spotlight in the 1984 Band Aid charity record "Feed the World."

The TPLF began as a small band of guerrilla fighters from the Tigray ethnic group, who account for six percent of Ethiopia's population. As the party prepared to assume power, in 1989, it engineered a coalition with larger ethnic groups, such as the Oromo and Amhara, to bolster its legitimacy. 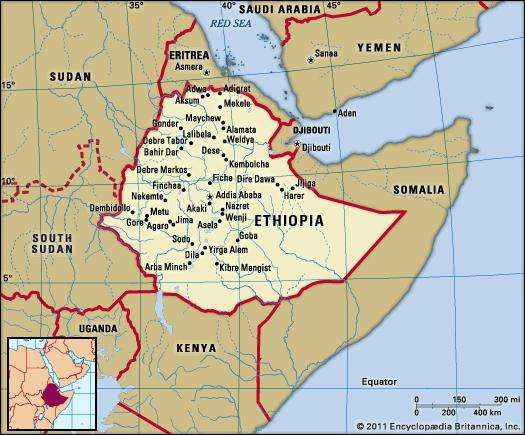 Read more on our extensive analysis on the Ethiopia-Eritrea truce here.

Abiy is Ethiopia's first prime mister from the country's biggest ethnic group, the Oromo, who make up one-third of its 100 million people. Ethiopia has more than 90 ethnic groups, and for decades the country's politics have been organized along these divisive lines.

Until Abiy, that coalition, the Ethiopian People's Revolutionary Democratic Front (EPRDF), ruled with an iron fist.

Ethiopia’s new Prime Minister Abiy Ahmed, who took office in April, has pledged political and economic reforms to address complaints of marginalization by a number of ethnic groups.

Ethiopia has finally agreed to the UN-backed Eritrea-Ethiopia Boundary Commission’s conditions to end the 20-year long border dispute between the two countries.

The border peace came after Prime Minister Abiy lifted the state of emergency in the country in June this year.

Government marginalization of other ethnic groups prompted an exodus of professionals from the nation and secession cries from the Oromo at home.

A state of emergency was called for the second time in 18 months and an internet blackout followed, including in the capital.

Furthermore, while Abiy has apologized for the torture that political prisoners endured in jail under previous governments, there is no sign that offending guards will face charges.

Perhaps the biggest concern is that "Abiymania," and the faith it confers, will blind Ethiopians to the potential flaws of their leader, and weaken the democratic process.

However, Prime Minister Abiy’s administration has a far-reaching impact, which is usually neglected while discussing Ethiopian politics. Ethiopia’s location in the Horn of Africa is critical in the fight against piracy originating in Somali waters.

The conflict has weakened this region, reflecting in tensions across South Sudan, Somalia and Chad.

Prime Minister Abiy’s decision to govern Ethiopia as a nation built on the rule of law could have long-lasting implications on the peace and security in the Horn of Africa.

Our assessment is that like most of the revolutionary leaders who promised change in Africa’s history, PM Abiy seems to be enjoying the crest of his popularity. We feel that we have to wait and see if PM Abiy aggressively pursues the liberal agenda he promised in his campaigns or if his mind changes to rule Addis Ababa like another warlord in Ethiopia’s past.