The organization Doctors without Borders has revealed that between August 25th and September 24th 2017, at least 9,000 Rohingya Muslims reportedly died in..

The organization Doctors without Borders has revealed that between August 25th and September 24th 2017, at least 9,000 Rohingya Muslims reportedly died in Rakhine state, Myanmar. This is reportedly according to surveys that were conducted in refugee settlement camps in Bangladesh.

The signing of the repartion agreement between Myanmar and Bangladesh on Nove 23rd has raised expectations and concerns of an imminent return of Rohingyas refugees to the northern Rakhine state.

A fresh bout of violence erupted in Myanmar on August 25th, 2017. Over 620,000 Rohingya Muslims fled the region as a direct result of it. Those who fled the region under dangerous circumstances have since claimed that the nation’s armed forces were involved in activities such as burning homes and attacking women and children. The government and the military of Myanmar have denied such claims.

Doctors without Borders is an international humanitarian non-governmental organization (NGO) best known for its projects in war-torn regions and developing countries affected by endemic diseases. Much of the organization’s personnel are doctors and in 2015 it provided medical aid to over 70 countries. 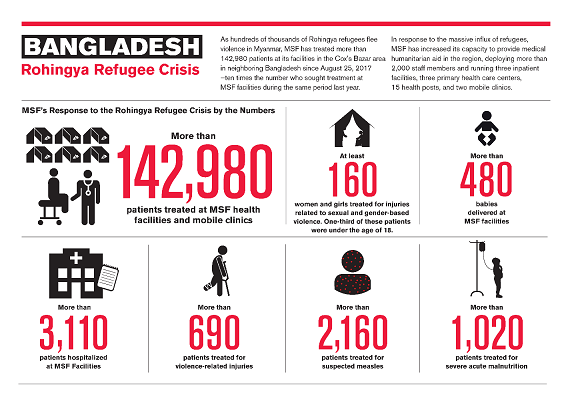 Much of those who fled Myanmar, crossed borders into Bangladesh. There are now hundreds of thousands of refugees in camps across the country. Doctors without Borders has now revealed that at least 9,000 Rohingya Muslims have been killed between August and September due to this violence.

The organization was able to arrive at this number after having conducted surveys across refugee camps in Bangladesh. Doctors without Borders noted, “Of the reported deaths, 71.7 percent were caused by violence. Using the most conservative estimates, at least 6,700 Rohingya are estimated to have been killed, including at least 730 children under the age of five.”

"We met and spoke with survivors of violence in Myanmar, who are now sheltering in overcrowded and unsanitary camps in Bangladesh," said Dr. Sidney Wong, MSF medical director. "What we uncovered was staggering, both in terms of the numbers of people who reported a family member died as a result of violence and the horrific ways in which they said they were killed or severely injured. The peak in deaths coincides with the launch of 'clearance operations' by Myanmar security forces in the last week of August."

More than 59 percent of those under the age of five killed during that period were shot, 15 percent were burned to death, 7 percent were beaten to death and 2 percent killed in landmine blasts, according to MSF.

Wong has stated that even 9,000 is a conservative number and the final death tally is likely to be much higher. She said, “The numbers of deaths are likely to be an underestimation, because we have not surveyed all refugee settlements in Bangladesh and because the surveys don’t account for families that never made it out of Myanmar. We heard reports of entire families who perished after they were locked inside their homes and set on fire.”

She also warned that those who are currently in refugee camps should not be made to return to Myanmar as there is no clarity over whether or not their lives will be safe in the future. She noted, “With very few independent aid groups able to access Rakhine, we fear for the fate of Rohingya people who are still there," said Wong. "The signing of an agreement between the governments of Myanmar and Bangladesh over the return of refugees is premature. Rohingya should not be forced to return, and their safety and rights need to be guaranteed before any such plans can be seriously considered.”

Our assessment is that the refugee crisis enfolding in Myanmar is one of the worst ones witnessed in the region in recent history. We feel that the key issue is whether the Rohingya refugees will return to Myanmar in 2018. We believe that such a situation will emerge if the refusgees are assured of their physical security, ability to sustain livehoods  and a hopeful future. This would mean meaningful progress on implemnting key recommendations of the advisory commission led by former UN secretary General Kofi Annan. The Myanmar government has embraced these recommendation , but there is little sign of progress so far.