The North East has been often ignored in national political campaigns, with candidates making a stop at a single location for the purposes of a nice photo-op. The region has become more important for the country than many politicians in the past could have imagined. 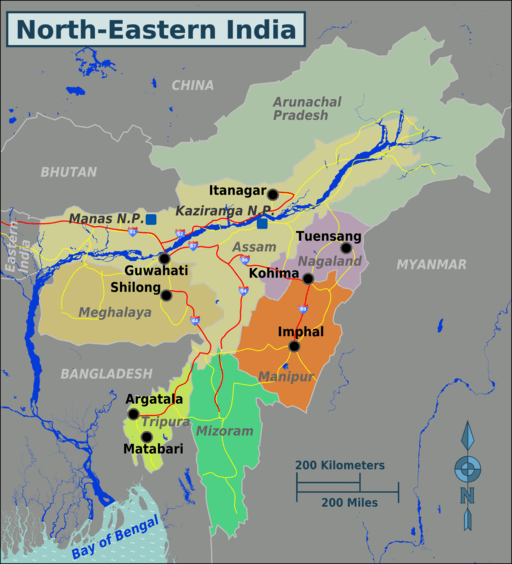 The North East region can be physio-graphically categorised into the Eastern Himalaya, the Patkai and the Brahmaputra and the Barak valley plains. Arunachal Pradesh, a state in the Northeastern tip of India, is claimed by China as South Tibet. Sino-Indian relations degraded, resulting in the Sino-Indian War of 1962.

In the 21st century, there has been recognition among policymakers and economists that the main stumbling block for economic development in the North Eastern region is the disadvantageous geographical location. It was argued that globalisation propagates deterritorialization and a borderless world which is often associated with economic integration. With 98 percent of its borders with China, Myanmar, Bhutan, Bangladesh and Nepal, North East India appears to have a better scope for development in the era of globalisation.

This policy is reflected in the Year End Review 2004 of the Ministry of External Affairs, which stated that: "India’s Look East Policy has now been given a new dimension by the UPA Government. India is now looking towards a partnership with the Association of Southeast Asian Nations ASEAN countries, both within BIMSTEC and the India-ASEAN Summit dialogue as integrally linked to economic and security interests, particularly for India’s East and North East region."

Despite the rapid development of the region in the past decade, it is relatively disconnected from the rest of the country. Skilled labour, quality educational institutions and capital generation are possibly the biggest areas of concern, despite its literate population.

The social-demographic issues pale in comparison to the North East’s invaluable strategic vantage point. For decades, New Delhi has treated the North East as a strategic frontier of sorts against China, developing the bare minimum required to establish a credible presence. We believe that the North East should not be treated as an outpost for the Union, and its strategic value should be counted for when national policies are decided.

The region is in need of an economic boost, an educational revolution and an infrastructure overhaul. China’s presence in Tibet is bolstered by all-weather, reliable logistical infrastructure, which includes a high-speed rail link from Beijing to Lhasa. The same cannot be said for India, with the Border Roads Organisation (BRO) building roads only up to major security checkpoints and army posts along the Line of Actual Control (LoAC).